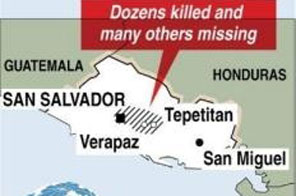 Map locating the area of El Salvador worst hit by rains. A late-season hurricane is heading for the United States and oil fields in the Gulf of Mexico after helping cause flooding and landslides that killed 124 people in El Salvador. Source: AFP

SAN SALVADOR: Floods and landslides left at least 124 people dead in El Salvador on Monday after a late-season hurricane ravaged parts of Central America and took aim for the United States.
Landslides and overflowing rivers carried away houses, while a raging torrent ripped through an entire section of one town. Some of the bodies were taken to a chapel and covered in mud-caked sheets.
"All we heard in the morning was loud noise," Arnoldo Paz, a resident of Verapaz in the central region of the country, told AFP.
"It was a torrent of water and mud that swept away everything in its path. All I could do was tell my wife to grab the kids and flee."
He said his house had been swept away by the current.
Although Hurricane Ida did not hit El Salvador directly, it brought heavy rain that affected the entire region. The storm was crossing the Gulf of Mexico on Monday, heading toward the United States.
Late Sunday, President Mauricio Funes declared a state of emergency in the Pacific coast country of some seven million people, saying the rains and subsequent flooding had claimed at least 124 lives.
"Today is a very sad day for the country and its government, in fact it is one of the most tragic days in memory," Funes said in a televised address to the nation.
"I want to express my condolences to the families of the 124 victims that have been identified thus far."
Heavy downpours have lashed the country since Thursday, causing mudslides and flooding in various areas. Most of the deaths have occurred in the areas of San Salvador, La Libertad, Cuscatlan, La Paz and San Vicente.
The president said the state of emergency will allow his government access to special funds necessary to provide assistance to disaster areas. But he stopped short of saying how much money would be spent to help victims and repair the damage.
The emergency declaration also signals the country's readiness to receive international aid.
Jorge Melendez, director of the Civil Protection Service, said the rains were also caused by a pocket of low atmospheric pressure that had formed over the region as the hurricane, now a category one storm, approached from the Caribbean.
Melendez added that "there could be more fatalities" in the eastern regions of Verapaz and Tepetitan.
In Tepetitan, landslides and overflowing rivers carried away some 30 houses, authorities said. Some residents had agreed to evacuate the area, but a number "refused to leave their homes," according to mayor Ana Jovel.
In Verapaz, 71 miles (114 km) southeast of the capital San Salvador, officials reported a raging torrent of mud, rocks and tree trunks ripping through a whole section of the town, burying houses and cars.
A dozen bodies of victims were taken from the devastation to a local chapel and covered with white sheets, caked with mud, as they awaited identification by relatives.
El Salvador has been on a state of alert since heavy rains associated with Ida began to affect the region, destroying an estimated 930 homes and leaving some 13,000 people homeless in Nicaragua.
On Saturday, Nicaragua's President Daniel Ortega said his government hoped to make available up to 4.4 million dollars in aid for those affected by the storm.
Torrential rains have also hit the neighboring nations of Mexico, Honduras and Guatemala.
No victims or major damage have been reported either in Honduras or Mexico, but about 100 homes have been damaged by flooding in Guatemala, prompting the evacuation of at least 200 people there.