EU says China, EU must show joint leadership on climate as US pulls back 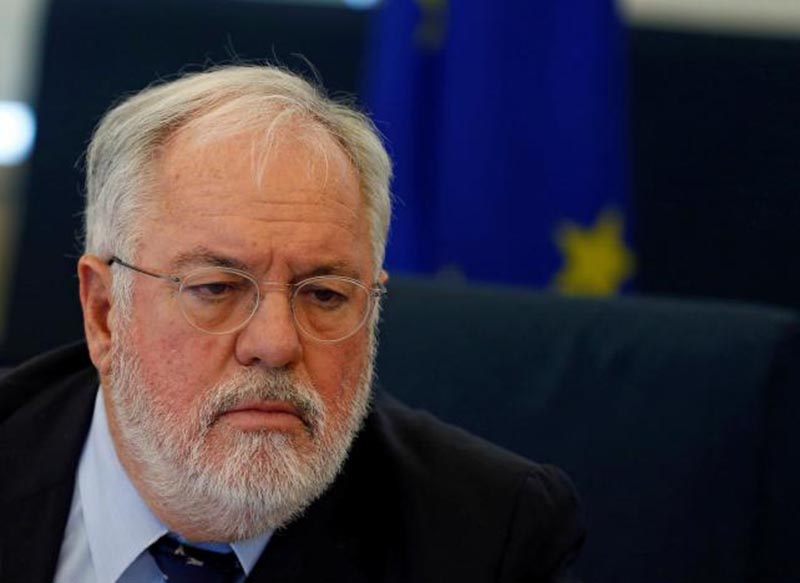 European Climate Action and Energy Commissioner Miguel Arias Canete attends a news conference in Beijing, China March 30, 2017. Photo: Reuters
BEIJING: China and the European Union need to show joint leadership on climate change and cannot expect the "same leadership" from the new administration in the United States, European climate commissioner Miguel Arias Canete said in Beijing on Thursday. Canete, speaking to reporters after meeting Chinese officials, expressed regret that the United States was rolling back climate policies, but said China and Europe remained committed to "driving forward" the global battle against climate change. "We are not going to backslide even if the United States at the moment...is backsliding from its previous commitments," he said. US President Donald Trump on Tuesday signed an order to undo Obama-era climate change regulations, keeping a campaign promise to support the coal industry and calling into question US support for the international deal to fight global warming. Obama's Clean Power Plan, aimed at slashing power plant emissions, was a key component of joint pledges made in 2014 by China and the United States, the world's two biggest producers of climate-warming greenhouse gas, and helped seal a new global pact signed in Paris at the end of 2015. The Paris Agreement seeks to phase out net greenhouse gas emissions by the second half of the century and limit global warming to "well below" 2 degrees Celsius (3.6 degrees Fahrenheit) above pre-industrial levels. Climate activists expressed concern the new US position would jeopardise negotiations to implement the Paris agreement, which are set to be completed in 2018, and urged the European Union to step into the breach. "There is a clear risk that the United States might go beyond the delicate balance that the countries agreed in Paris," said Li Shuo, senior climate adviser with environmental group Greenpeace. "We might have some trouble, and if the European Union and China can reaffirm their commitment to conclude this process, that will send a strong political signal," he said. Canete said Trump's order on Tuesday gave no indication of the United States' intentions when it comes to honoring the Paris deal, and to fulfill its commitments it needed to explain how it would meet targets. "If they, at the moment, lose all the tools they have in order to achieve those targets, it's pretty clear they will not achieve those targets," he said. Though the role of the United States in climate negotiations was likely to be completely different even if it remained part of the Paris agreement, it still had a "very important responsibility" on climate change, he added.
#European Union #Paris Agreement #joint leadership on climate change #European climate commissioner #undo Obama era climate change regulations
You May Also like: