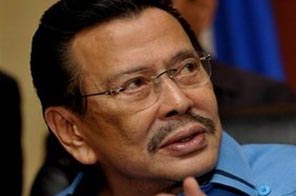 Deposed former president Joseph Estrada, seen in Manila in September. Estrada, ousted in a popular uprising in 2001 and later convicted of graft, said on Wednesday he would run again for president in next year's elections. Source: AFP

MANILA: Former Philippine leader Joseph Estrada, ousted in a popular uprising in 2001 and later convicted of graft, said on Wednesday he would run again for president in next year's elections.
"Yes, I will run," Estrada, 72, told AFP, when asked to confirm local press reports of his decision.
The former movie action star said he had chosen Jejomar Binay, the popular mayor of Manila's Makati financial district and a leader of the political opposition as his vice presidential candidate.
Estrada said he would make a formal announcement of his decision at the Catholic Sto Nino church in the impoverished Manila district of Tondo on Wednesday next week.
Tondo was the setting of many of his past movies, in which he gained massive national popularity by playing tough guy roles as defenders of the poor and downtrodden.
Estrada represents the United Opposition, a coalition of two influential parties that have been critical of President Gloria Arroyo's rule.
However there are two strong opposition contenders representing other parties in next year's elections: Benigno Aquino, the son of the late democracy icon Corazon Aquino, and billionaire property developer Manny Villar.
Defence Secretary Gilberto Teodoro will represent Arroyo's ruling Lakas-Kampi-CMD coalition.
Estrada said he was confident of victory in the May 2010 polls.
"I will not run for the presidency if I'm not sure I'll win," he said.
Estrada said his edge would be his experience, having climbed the political ladder first as a town mayor, a senator and a vice president before a landslide victory as the country's 13th president in 1998.
Estrada's term, however, was cut short by a military-backed popular revolt in 2001, amid accusations he amassed wealth from illegal gambling kickbacks and shady deals amounting to about 80 million dollars.
He was convicted of large-scale graft and sentenced to life in jail in 2007.
But Arroyo, who played a key role in deposing him when she served as his vice president, pardoned him six weeks later.