At her first summit, UK's May tries to reassure EU on Brexit 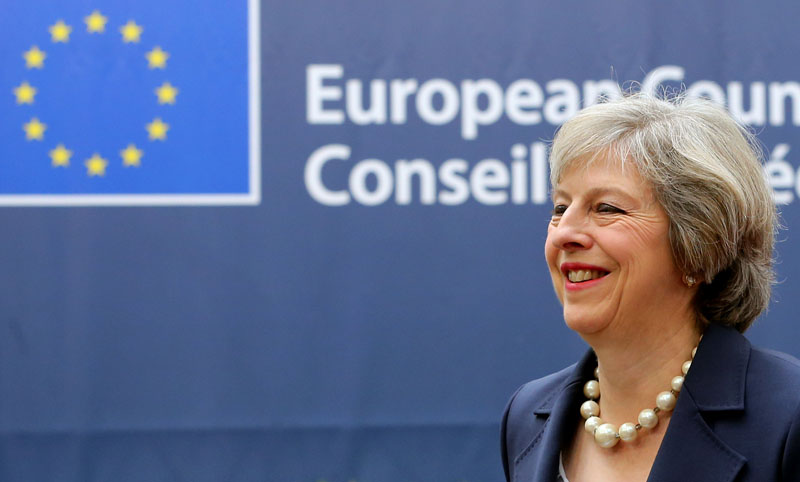 British Prime Minister Theresa May arrives at the EU Council headquarters for a European Union leaders summit in Brussels, Belgium, on October 20, 2016. Photo: Reuters
BRUSSELS: Attending her first European Union summit since Britain's vote to leave the bloc, Prime Minister Theresa May tried to reassure EU leaders over Brexit but was told by French President Francois Hollande to prepare for tough negotiations. At a gathering in Brussels where EU leaders had robust debates on Russia, migration and trade issues, May was allotted a short time slot at the end of dinner on Thursday to lay out her plans for taking Britain out of the EU after more than four decades as a member. May has said she will formally notify the EU of Britain's plan to leave by the end of March, but she and her ministers have sent conflicting signals about what kind of relationship they envision once the divorce talks end. Her speech at a conference of her Conservative Party in early October suggested to some that she was leaning towards a so-called "hard Brexit" in which Britain would place limits on immigration and lose access to Europe's lucrative single market. "This is my first European Council and I'm here with a very clear message," May said at the start of the summit. "The UK is leaving the EU but we will continue to play a full role until we leave and we'll be a strong and dependable partner after we have left." Despite the conciliatory tone, Hollande warned May that "the negotiations will be hard". And German Chancellor Angela Merkel, while welcoming May's message that Britain would try to avoid causing damage to the EU in the looming talks, said the two sides faced a "difficult path". Leaders from across the bloc also made clear that they would not bow to May's suggestion that preparatory talks take place before she invokes Article 50 of the EU treaty, starting the two-year countdown to Brexit. "There will be no negotiations before Article 50 is triggered by the UK," said European Council President Donald Tusk. "However, the basic principles, namely the single market and the indivisibility of the four freedoms, will remain our firm stance." An aide to May said: "The message that no negotiation (will take place) pre-notification has been pretty loud and clear." "NEST OF DOVES" If Britain places limits on the free movement people, one of the EU's core principles, it will lose its access to the single market, governments on the continent have warned. Banks in the City of London are worried that they could lose their right to sell services across Europe if May insists on curbing migration under a deal with the EU-27. After bracing for a potentially difficult summit, the aide to May said the atmosphere had been "constructive" and said the prime minister had sought to prove that Britain was still an active member of the union by supporting action against Russia over Syria. EU diplomats said May had intervened at numerous points during the evening, not only on Syria but also Europe's migration crisis, a topic she dealt with as interior minister. During a discussion of plans the other leaders made without her at a summit of the EU-27 last month, she spoke up to say that Britain should not be excluded from decisions while it remained a member. It was not quite the "nest of doves" that Tusk had promised earlier when asked whether May was entering the lions' den. Leaders were clear that they would not allow Britain to "cherry pick" the profitable parts of their union, such as free access to the market for certain sectors, without taking on the full responsibilities of membership. At the tail end of a dinner of scallops and lamb, May set out her approach to Brexit, underlining there would be no second referendum and that she wanted Britain's departure from the EU to be "smooth and orderly" to safeguard the economy and calm increasingly nervous investors and markets. There was no discussion after she spoke, an EU diplomat said. "May stuck to her speaking notes," the diplomat said, echoing frustration in some European capitals that they have gained little from the British prime minister beyond her oft-repeated mantra that "Brexit means Brexit". Hollande told reporters that May had pledged to enter discussions in a constructive spirit, before adding: "We'll see."
#Francois Hollande #Theresa May #European Union summit 2016 #Post Brexit EU summit #Tough EU negotiation
You May Also like: