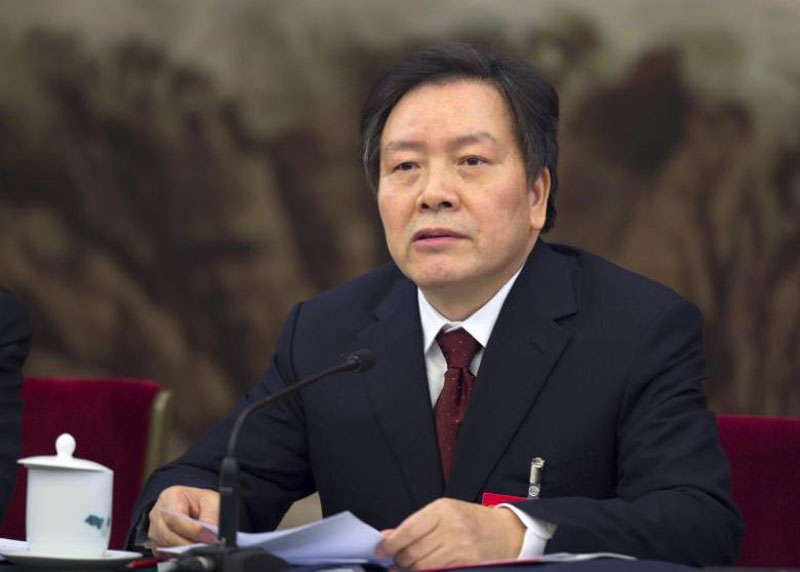 Communist Party Secretary of Hebei province Zhou Benshun speaks at a session of the National People's Congress (NPC) in Beijing, China, in this March 7, 2015 picture. Photo: Reuters
BEIJING:  A court in southeastern China on Wednesday sentenced the former Communist Party boss of the northern province of Hebei to 15 years in jail after finding him guilty of corruption, the latest senior official jailed in a sweeping crackdown on graft.
Zhou Benshun was the top official of Hebei province, which surrounds Beijing and is China's most important steel producer. He had earlier worked with one-time domestic security chief Zhou Yongkang, who was jailed for life in 2015 after a secret trial in China's most sensational graft scandal in 70 years. The two are not related despite sharing a family name. In a statement on its official microblog, the court in Xiamen city said that between 2000 and 2015 Zhou had directly or via family members taken more than 40 million yuan ($5.82 million) in bribes. The bribes were given in exchange for help with real estate projects, bank loans and promotions, the court said. Zhou admitted his guilt and has repented, the court said, adding that most of the bribes were handled by family members and that Zhou only found out about it subsequently. Zhou has decided not to appeal, it said. It was not possible to reach legal or family representatives for comment. The Hebei city of Zhangjiakou has won the right to host the 2022 Winter Olympics along with Beijing. Zhou had attended meetings of the bid committee. Zhou became party chief in Hebei in 2013. He had worked for five years in the Central Politics and Law Commission as its secretary general, under Zhou Yongkang. The court statement made no direct mention of Zhou Yongkang, but noted that some of Zhou Benshun's crimes occurred while he was working on the Central Politics and Law Commission. Zhou Benshun's case was featured in a government-made documentary about corruption broadcast in October, describing his involvement in "superstition". Party officials are not supposed to practice religion and the charge of superstition is often levelled against the corrupt to further blacken their names. President Xi Jinping, who doubles as party and military chief, has pursued a relentless campaign against deep-rooted corruption since assuming power three years ago, vowing to go after powerful "tigers" as well as lowly "flies".
#China #Zhou Yongkang #Zhou Benshun #Hebei #Former senior Chinese official
You May Also like: