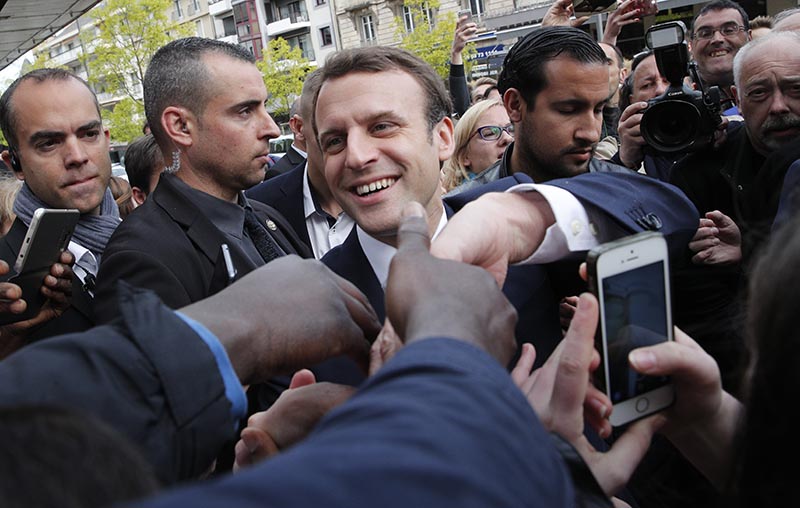 French independent centrist presidential candidate Emmanuel Macron shakes hands to supporters as he campaigns in Rodez, southern France, on Friday, May 5, 2017. Photo: AP
PARIS: France's election campaign watchdog is investigating a hacking attack and document leak targeting presidential candidate Emmanuel Macron that his political movement calls a last-ditch bid to disrupt Sunday's tense runoff vote. Fears of hacking and campaign interference have simmered throughout France's high-stakes, closely watched campaign — and boiled over Friday night as Macron's team said it had been the victim of a "massive and coordinated" hack. His political movement said the unidentified hackers accessed staffers' personal and professional emails and leaked campaign finance material and contracts — as well as fake decoy documents — online. The perpetrators remain unknown. While the hack is shaking up the already head spinning campaign, it's unclear whether the document dump would dent Macron's large poll lead over far-right Marine Le Pen going into the vote. After ditching France's traditional left-right parties in a first-round election, voters are now choosing between Macron's business-friendly, pro-European vision and Le Pen's protectionist, closed-borders view that resonates with workers left behind by globalization. The future of the European Union may hinge on the vote, also seen as a test for global populism. Voting begins in France's overseas territories Saturday before moving to the mainland Sunday, amid a nationwide blackout on campaigning and media coverage seen as swaying voters' views. The leak began just before the blackout descended at midnight, in theatrical timing fitting for the dramatic campaign. Someone on 4chan — a site known for, among other things, cruel hoaxes and political extremism — posted links to a large set of data which the poster claimed had come from Macron's campaign. Macron's campaign swiftly confirmed it had been hacked some weeks ago, and that at least some of the documents were genuine. Slamming the hack as an effort to "seed doubt and disinformation" and destabilize the vote, Macron's movement En Marche said it would "take all measures" to shed light on what happened. It recalled similar leaks from Hillary Clinton's U.S. presidential campaign, which also said that authentic documents were mixed with false ones. The No. 2 in Le Pen's anti-immigration National Front party, Florian Philippot, asked in a tweet, "will the #Macronleaks teach us something that investigative journalism deliberately buried?" The commission overseeing the French campaign said in a statement that it is holding a meeting early Saturday after being informed of the hack and leak. The voting watchdog also called on the Interior Ministry late Friday to look into claims by the Le Pen campaign that ballot papers are being tampered with nationwide to benefit Macron. The Le Pen campaign said electoral administrators in several regions who receive ballot papers for both candidates have found the Le Pen ballot "systematically torn up." The presidential campaign has been unusually bitter, with voters hurling eggs and flour, protesters clashing with police and candidates insulting each other on national television — a reflection of the widespread public disaffection with politics. Le Pen, 48, has brought her far-right National Front party, once a pariah for its racism and anti-Semitism, closer than ever to the French presidency, seizing on working-class voters' growing frustration with globalization and immigration. Even if she loses, she is likely to be a powerful opposition figure in French politics in the upcoming parliamentary election campaign. In an interview with The Associated Press on Friday, Le Pen said that win or lose, "we changed everything." She claimed an "ideological victory" and said she could still pull of a surprise win on Sunday. The 39-year-old Macron also helped upend France's traditional political structure with his wild-card campaign outside standard parties. Many voters, however, don't like either Le Pen or Macron. They fear her party's racist past, while worrying that his platform would demolish worker job protections or be too much like his mentor, the deeply unpopular outgoing President Francois Hollande.
#France Elections #French campaign #election-eve Macron leak
You May Also like: