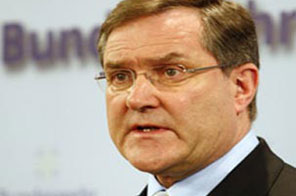 BERLIN: Germany's former defence minister Franz Josef Jung quit the cabinet on Friday over a deadly air strike in Afghanistan, the day after claims of a cover-up took the scalp of the country's top general.

Jung resigned his post as labour minister as pressure mounted over the bombing of two oil tanker lorries in the northern province of Kunduz in which dozens of civilians are believed to have died.

"After consideration ... I told Chancellor Merkel this morning that I was handing in my position as federal labour minister," Jung told reporters in Berlin.

"I am therefore taking the political responsibility for the internal communications policy of the defence ministry regarding the events of September 4 in Kunduz," he added.

"With this action, I would like to help the federal government continue without hindrance its successful work and avert damage to the army," he added.

Jung, 60, was defence minister at the time of the strike and insisted only two days afterwards that "only Taliban terrorists" were killed.

However a confidential NATO report cited in late October said that the death toll varied between 17 and 142, and that local sources had said between 30 and 40 civilians had lost their lives.

Jung's position was further weakened after allegations that the defence ministry hushed up a report on civilian casualties, which also suggested commanders on the ground did not adhere to the agreed rules of engagement.

After chief of staff General Wolfgang Schneiderhan stepped down on Thursday, the clamour for Jung's head grew even louder.

Merkel conspicuously failed to ride to her minister's aid, saying only that full transparency was crucial to win confidence in the Afghan mission, which polls show is unpopular in Germany, the third-largest provider of troops.

Jung, from the same centre-right Christian Democratic party as Merkel, but not seen as a particularly close ally, had been moved to his new post after she was re-elected two months ago.

Merkel's spokesman, Ulrich Wilhelm, told a regular news conference on Friday that the chancellor was "shocked" by the revelations.

After what was viewed as a largely unsatisfactory explanation in parliament late Thursday, Jung's position became increasingly untenable as the press bayed for blood in the morning editorials.

In a devastating front-page opinion piece headlined "Resign Please", the Financial Times Deutschland said: "Franz Josef Jung failed as defence minister and should resign from his position as labour minister."

"It would be no loss to the cabinet. There's nothing more to say," the paper added, leaving the rest of its front-page editorial column blank in a stark visual statement.

"Why is Merkel hanging on to Jung?" asked the influential mass circulation Bild daily, whose initial revelation that a military report on the September strike had been suppressed prompted the scandal.

Business daily Handelsblatt said: "The man is out of his depth. No doubt about it, he has to go."

Buoyed by a political scandal so soon after the election on September 27, opposition politicians also piled in with vigour, demanding explanations and a full-scale parliamentary investigation.

The deputy chair of the centre-left Social Democrats (SPD), Andrea Nahles, said: "After only four weeks, this government has collapsed into a crisis."

"Jung's resignation does not, however, clear everything up about the incident. Merkel and (current Defence Minister Karl-Theodor) zu Guttenberg must provide more clarity," she said.

Gregor Gysi, co-head of the far-left Die Linke party, said that Jung had made himself unsuitable for ministerial office after concealing information from the public and from parliament.

#German minister quits over Afghan
You May Also like: