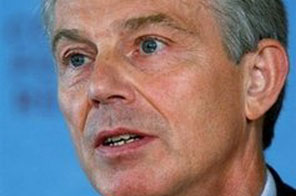 Prime Minister Gordon Brown has asked two of his most senior advisers to lobby discreetly in Europe to help secure ex-premier Tony Blair, seen here, the EU presidency, according to a report Tuesday. Source: AFP

LONDON: Prime Minister Gordon Brown has asked two of his most senior advisers to lobby discreetly in Europe to help secure ex-premier Tony Blair the EU presidency, according to a report Tuesday.

The report in the Guardian newspaper comes after the government officially launched Monday its campaign to see Blair installed as European Union president, as EU foreign ministers gathered in Luxembourg.

Foreign Secretary David Miliband told journalists that the EU bloc needs "a strong voice," amid growing opposition led by Belgium and Luxembourg to the former prime minister taking up the new post.

"If Blair is a candidate, he will be a good choice. He is a persuasive advocate, a genuine European and a real coalition-builder," Miliband said.

Czech President Vaclav Klaus has still to sign the Lisbon Treaty that creates the post of full-time EU president for the 27-nation bloc.

Brown's most senior Europe adviser, John Cunliffe, and Britain's EU ambassador, Kim Darroch, have been asked to lobby behind the scenes for Blair, according to the Guardian's report, citing unnamed sources.

The report also quoted warnings from senior government sources that Blair needed to launch a campaign for the post or risk it slipping away to someone else.

Blair, who was prime minister from 1997 to 2007, has not declared his candidacy for the job.

#Govt to help Blair win top EU job
You May Also like: