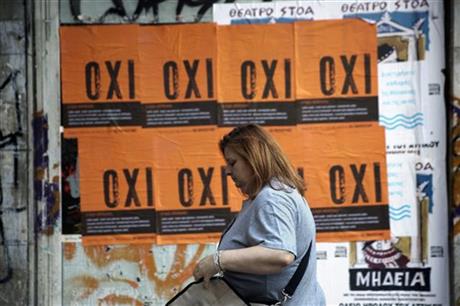 A woman passes in front of posters reading ''NO'' referring to the upcoming referendum, in Athens, Wednesday, July 1, 2015. Greece's government pressed ahead Wednesday with its plan to put austerity measures to voters after European creditors rebuffed its latest proposal for a new aid program. AP
ATHENS: Greece braced for more chaos on the streets outside its mostly shuttered banks Thursday, as Athens and its creditors halted talks on resolving the country's deepening financial crisis until a referendum this weekend. Banks have been closed all week to prevent a crash from mass money withdrawals, while a few have been reopened to help pensioners without ATM cards. But they are still in business. The European Central Bank left the terms of its emergency $100 billion cash support to Greece unchanged, a day after Athens slipped into arrears with the International Monetary Fund and its bailout program expired. The move kept chances alive for a settlement between Greece and creditors. And Finance Minister Yanis Varoufakis publicly thanked the ECB and its president, Mario Draghi, for the decision. "This allows us to breathe. It's a very positive move and a move of good will on the part of the European Central Bank. I welcome it," Varoufakis told state television. Draghi, he said, had faced down "hawks" among eurozone members who had demanded that Athens increase collateral needed to receive continued assistance. Asian stock markets advanced Thursday after gains on Wall Street as strong U.S. payroll data overshadowed worries about the Greek crisis. Greece is seeking a third bailout from the eurozone rescue fund after the previous deal expired this week without agreement on the terms of final pay outs. The impasse left billions bailout money frozen or canceled and saw Greece forced to close banks and its stock market for at least a week, while the country's left-wing government called a referendum urging voters to denounce the previous deal offered by creditors. Eurozone finance ministers decided to put the talks with Greece on hold till the vote takes place. "Given the political situation, the rejection of the previous proposals, the referendum which will take place on Sunday, and the recommendation by the Greek government to vote 'No,' we see no grounds for further talks at this point," Dutch Foreign Minister and eurogroup chairman Jeroen Dijsselbloem said after a late-night teleconference. "There will be no talks in the coming days." In Athens, crowds of anxious elderly Greeks thronged banks Wednesday beginning before dawn, struggling to withdraw their maximum of 120 euros ($134) for the week after the government reopened some banks to help pensioners who don't have bank cards. "It's very bad," said retired pharmacy worker Popi Stavrakaki, 68. "I'm afraid it will be worse soon. I have no idea why this is happening." Business associations and the country's largest labor union urged the government to cancel the vote. And the Council of Europe — an independent body that monitors elections and human rights — told The Associated Press the referendum would fall short of international standards. In a sign of serious financial deterioration, Greece suffered another sovereign downgrade, the fourth this week, as Moody's slashed the country's rating from Caa2 to Caa3, or just above default. Prime Minister Alexis Tsipras resisted the pressure, however, insisting a "No" vote would give the government a stronger negotiating position. "There are those who insist on linking the result of the referendum with the country's future in the euro," Tsipras said. "They even say I apparently have a secret plan to take the country out of the EU if the vote is 'No.' They are lying with the full knowledge of that fact." Greece is in a financial limbo now that its bailout program has expired, cutting it off from vital financing and pushing it one step closer to leaving the euro. It also has become the first developed country to fail to repay a debt to the International Monetary Fund on time. The last country to miss an IMF payment was Zimbabwe in 2001. As long as it is in arrears on the IMF payment, Greece cannot get any more money from the organization. The referendum has thrown additional confusion into the already fraught negotiations. German Chancellor Angela Merkel said a deal remained impossible before the referendum, while French President Francois Hollande said creditors should seek an accord before then. "We have to be clear. An accord is for right now, it will not be put off," Hollande said.
#Greece #financial crisis
You May Also like: