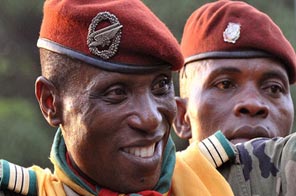 CONAKRY: The head of the ruling junta in Guinea said Sunday he bears "no responsibility" in the September 28 massacre of opposition protesters in which the United Nations says more than 150 people were killed.

Capitain Moussa Dadis Camara, who has been in power for nine months, distanced himself from the bloodbath at Conakry in an interview with Radio France Internationale (RFI).

"I am told that there was a carnage and that soldiers opened fire," he added, before referring to himself in the third person.

Thousands had gathered at Conakry's main stadium to protest against the possibility of Camara becoming a candidate in presidential elections on January 31 when soldiers opened fire.

The junta says 56 civilians were killed, but the Guinean Human Rights Organisation alleges that at least 157 people were killed and 1,253 wounded in the crackdown. The United Nations has put its toll at more than 150.

Camara has previously disclaimed responsibility, pinning blame instead on what he called "uncontrolled elements" within the armed forces in his francophone West African nation.

Burkina Faso President Blaise Compaore, tasked by the Economic Community of West African States (ECOWAS) to act as a "facilitator" to ease tensions in Guinea, is to arrive in Conakry on Monday, his foreign minister told AFP.

"It is foreseen that he will meet leaders of the country, opposition figures and all those who can help find a way out of this crisis in a brother country," an adviser to Compaore said.