Half of natural World Heritage sites at risk from industry: WWF 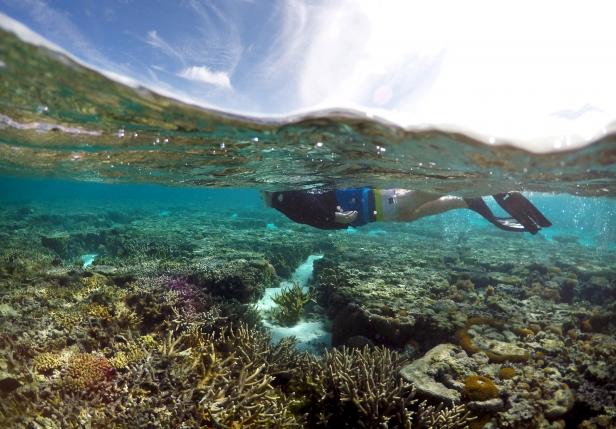 A tourist snorkels above coral in the lagoon located on Lady Elliot Island and 80 kilometers north-east from the town of Bundaberg in Queensland, Australia, in this June 9, 2015 file photo. REUTERS
OSLO: Industrial activity such as mining and logging threatens almost half of the world's natural World Heritage sites, from Australia's Great Barrier Reef to the Inca citadel of Machu Picchu in Peru, the WWF conservation group said on Wednesday. It urged companies to obey UN appeals to declare all heritage sites "no go" areas for oil and gas exploration, mines, unsustainable timber production and over-fishing. A total of 114 World Heritage sites out of 229 worldwide that are prized for nature or a mixture of nature and culture were under threat, according to the study by WWF and Dalberg Global Development Advisors, a US-based consultancy. "This is staggering. We're trying to raise a flag here," Marco Lambertini, director general of WWF International, told Reuters. "We're not opposing development, we're opposing badly planned development." The WWF findings are far higher than the 18 natural sites listed as "in danger", a more severe condition, by the World Heritage Committee of the UN's cultural agency UNESCO. The WWF rates the Great Barrier Reef, for instance, as under threat from mining and shipping, while last year, the Heritage Committee stopped short of an "in danger" listing. And the WWF says Machu Picchu in the Andes, also not on the UN list, is under threat from logging. Other sites under threat include the Everglades in the United States, Ecuador's Galapagos islands or Russia's Kamchatka volcanoes, it said. Of those, only the Everglades were rated "in danger" by the Heritage Committee. Mechtild Rossler, director of UNESCO's World Heritage Centre in Paris, said she welcomed such non-governmental reports as an aid to raise awareness of risks. Only some companies have heeded repeated UN calls for no go zones. The International Council of Mining and Metals, grouping major companies, agreed in 2003 to stay out of World Heritage sites. Some oil and gas companies, such as Total (TOTF.PA) and Shell (RDSa.L), have made similar commitments. "Oil and gas is more an individual discussion. We lack the overall organised approach," Rossler told Reuters. The WWF study said that more than 11 million people depended on the heritage sites for food, water, shelter and medicine. Lambertini said that the economic value of nature was too often ignored, even though the sites created jobs, for instance from ecotourism worth billions of dollars. "Nature continues to be taken for granted," he said. The study expands on a report by the WWF last year that said about a third of sites were threatened by mining and oil and gas. It adds threats such as over-fishing, harmful logging and disruptions of water supplies from dams.
#world heritage sites #WWF
You May Also like: