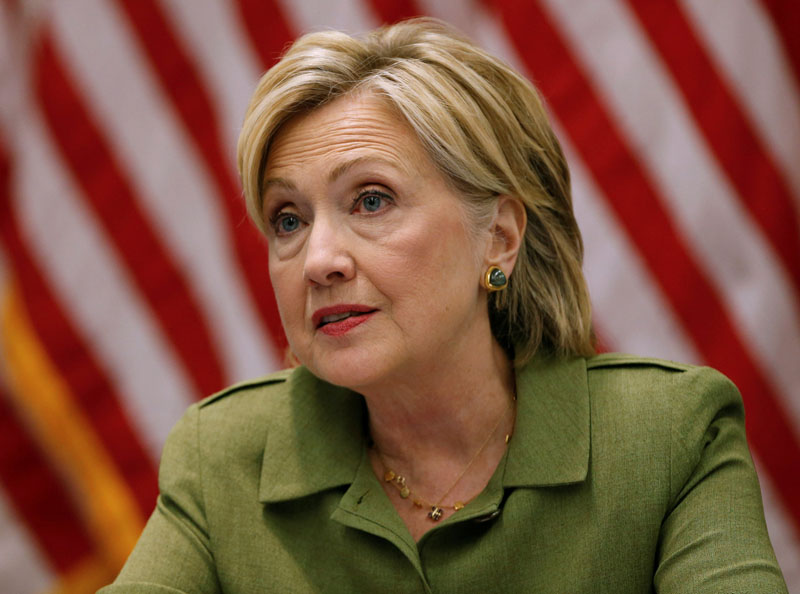 File - US Democratic presidential nominee Hillary Clinton delivers remarks at a gathering of law enforcement leaders at John Jay College of Criminal Justice in New York, US, on August 18, 2016. Photo: Reuters
NEW YORK: Democratic presidential candidate Hillary Clinton leads Republican rival Donald Trump by 8 percentage points among likely voters, according to a Reuters/Ipsos opinion poll released on Friday. The Aug. 14-18 survey showed 42 percent of Americans supported Clinton ahead of the November 8 general election. That compares with 34 percent support for Trump. Another 23 percent of likely voters would not pick either candidate. Clinton has led Trump in the poll throughout most of the 2016 campaign, and has maintained her advantage following last month's Republican and Democratic conventions. Since late July, support for the former secretary of state has ranged between 41 percent and 44 percent of likely voters, while Trump's support has varied between 33 percent and 39 percent. The race was tighter at this point in the 2012 election, with Democratic President Barack Obama ahead of Republican nominee Mitt Romney by less than 2 percentage points. Clinton also led a separate Reuters/Ipsos poll that asked people to choose between Clinton, Trump, Libertarian candidate Gary Johnson and Jill Stein of the Green Party. Some 41 percent supported Clinton and 34 percent supported Trump. Among alternative-party candidates, Johnson came in third with 7 percent and about 2 percent supported Stein. Clinton and Trump have both struggled to inspire American voters this year. According to the poll, neither candidate is regarded favorably by most Americans, and two-thirds of US adults believe the country is on the wrong track. Clinton continues to face questions about her handling of classified emails while serving as Obama's secretary of state, while Trump's off-the-cuff remarks about immigrants, women and Muslims have rankled members of his own party. Republican leaders, including former members of Congress, have called for the Republican National Committee to stop helping Trump and refocus its resources on helping candidates win down-ballot races for the House of Representatives and the Senate. Earlier this week, Trump reshuffled his campaign leadership while his campaign chief, Paul Manafort, faced increased scrutiny over his work with pro-Russian political groups in the Ukraine. Manafort resigned on Friday. The Reuters/Ipsos poll was conducted online in English in all 50 states. It surveyed samples of 1,119 and 1,118 likely voters, respectively, and has a credibility interval, a measure of accuracy, of 3 percentage points
#Hillary Clinton #Donald Trump #Democratic presidential candidate #Republican rival #Clinton leads Trump #Reuters/Ipsos opinion poll
You May Also like: