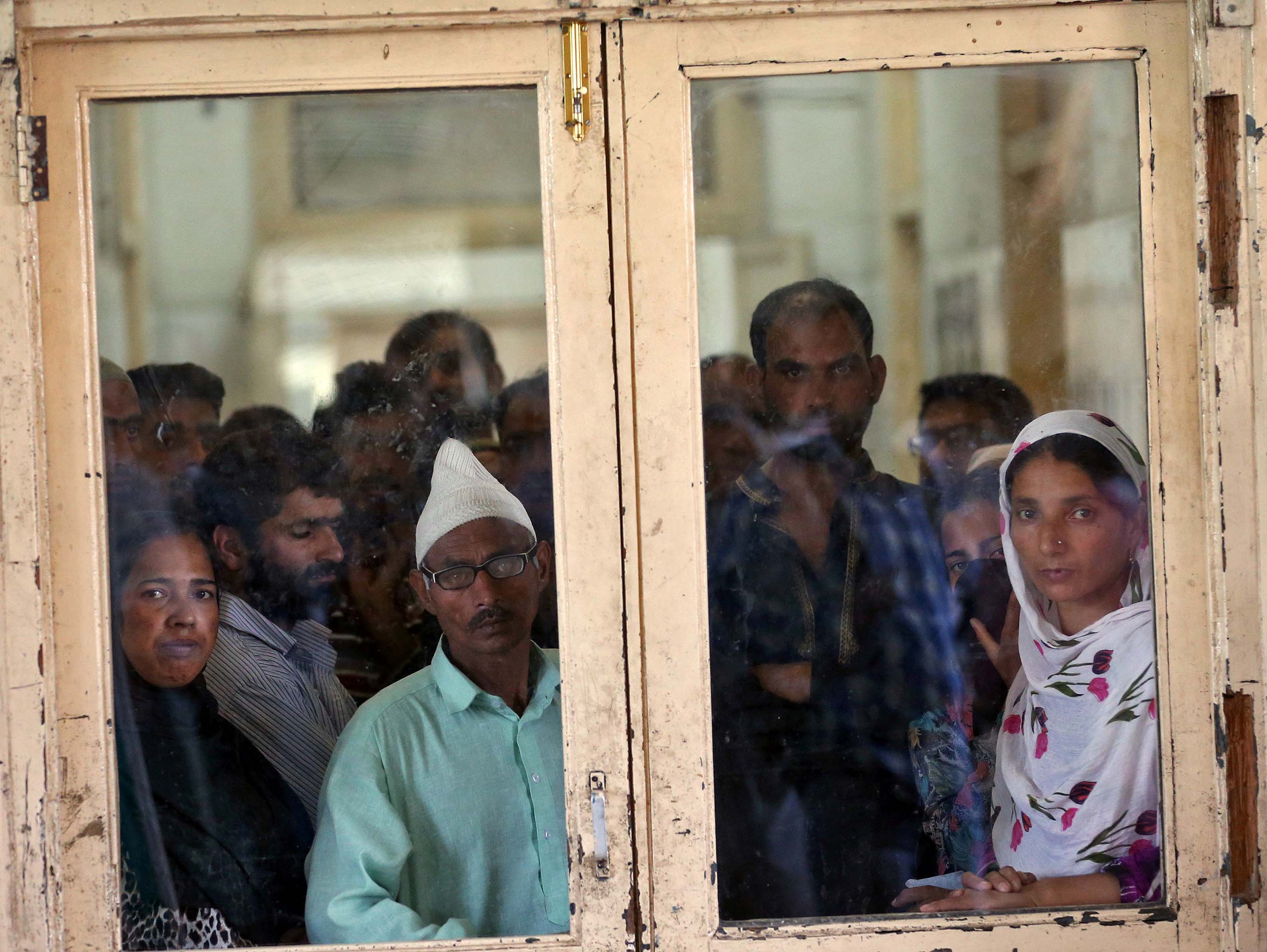 People wait for news at a hospital in Srinagar about family members whom they say were beaten by security forces near Srinagar following weeks of violence in Kashmir, on Thursday, August 18, 2016. Photo: Reuters
SRINAGAR: More than 40 days of clashes between protesters and security forces have overwhelmed the main hospital in Indian-administered Kashmir, where some patients with severe injuries said they had been beaten in their homes by troops. House-to-house searches continued on Friday, authorities said, for suspected ringleaders of street protests sparked by the killing on July 8 of a popular field commander of a Pakistan-based separatist group. At least 65 people have been killed and 6,000 injured in the ensuing clashes, many of them wounded by shotgun rounds fired by security forces enforcing a curfew across the Muslim-majority region. Pictures taken by a Reuters photographer at Srinagar's main SMHS Hospital on Thursday showed men with weals across their backs and buttocks that they said had been caused by beatings. Another showed a crying boy, his head swathed in bandages, as he was comforted by his family, who said he had been wounded by shotgun pellets. Doctors at the hospital were exhausted, with one saying they had performed more eye operations in the past month than they had over the last three years. "We have here less number of beds and staff. We are in physical and mental stress," said Nisarul Hassan, senior consultant at SMHS hospital who was forced to use an ambulance to get back home. The Indian army has admitted to, and apologised for, the death of a college lecturer in one beating. A senior army officer said on Friday the forces were trying not to react to acts of provocation. "Militants are hiding behind the stone pelters and are trying to provoke security forces into firing on them, but we are exercising restraint to avoid civilian casualties," Lieutenant General SK Dua told a news conference in Srinagar. "They want us to fire on them and we will not do it. We are exercising restraint to avoid collateral damage." Hospital overwhelmedz Dozens of volunteers received the injured at SMHS Hospital as ambulances brought them in from rural areas. Paramedics and ambulance drivers said government forces attacked them on the way. The curfew restricts movement, severely disrupting daily life. "India and Pakistan are fighting over my homeland but in the end it's is only our blood that they manage to secure," said Faizal Wani, 24, whose father was being treated for pellet wounds suffered in the clashes. Another doctor said patients have been brought in with abdominal injuries from rifle bullets. "Our operating theatres are working non-stop," the doctor told Reuters. Troops have resorted to firing rifles and shotguns to quell stone-throwing protests sparked by the death of Burhan Wani, a field commander of the Hizbul Mujahideen separatist group. India's Central Reserve Police Force, which deploys a large contingent of paramilitaries in Kashmir, told a regional court that more than 100 people had been partly or completely blinded by shotgun pellets. Kashmir is at the centre of a decades-old rivalry between India and Pakistan, which rules a northwestern section of the divided region, and backed an insurgency in the late 1980s and 1990s that Indian security forces largely crushed. A top U.N. human rights official has expressed "deep regret" at the failure of both India and Pakistan to grant access to the separate parts of Kashmir that each runs to investigate allegations of serious human rights violations.
#Kashmir #Srinagar #Indian-administered Kashmir #SMHS Hospital #Hizbul Mujahideen separatist group
You May Also like: