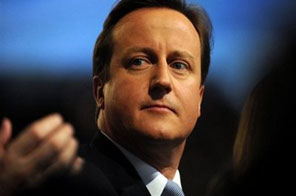 MANCHESTER: David Cameron will declare he is "ready" to take power Thursday, closing his party's annual conference for perhaps the last time in opposition.
With polls putting the Conservatives on course to win a general election due by June, Cameron will warn of tough choices as Britain emerges from recession but argue that his party can bring the country through.
"None of this will be easy. We will be tested. I will be tested. I'm ready for that and so, I believe, are the British people," Cameron will say according to pre-released extracts of his speech.
He is also expected to confirm that the former head of the army, Richard Dannatt, is signing up for the Conservatives.Related article: Dannatt signs for Tories
Dannatt -- who has repeatedly criticised Prime Minister Gordon Brown's government for underresourcing the war in Afghanistan -- will be given a seat in the House of Lords, act as a policy adviser and could be made a minister if the Conservatives win the election, British media reported.
Cameron, a youthful moderniser, has transformed the Conservatives in his four years as leader, casting aside three election defeats to put them well ahead of Labour in the polls.
And he will use his speech to outline his vision, spelling out what a Conservative government would do and what a Tory Britain would look like.
He will also reiterate his promise to hold a referendum on the European Union's Lisbon Treaty, a pledge that has sparked signs of divisions here.Related article: Tory eurosceptics
Building on belt-tightening measures unveiled this week to tackle Britain's record deficit, the Tory leader will warn of a "steep climb ahead" that will involve cuts in public spending.
"Don't get me wrong, I have no illusions. If we win this election, it is going to be tough," he will say, but will add: "I tell you this the view from the summit will be worth it."
He will also reiterate his belief in helping some of the most vulnerable in society, a key strain of his "compassionate Conservatism" that many analysts credit for his party's poll revival.