NEW DELHI: Authorities in Indian-administered Kashmir said that they eased restrictions Sunday in most parts of Srinagar, the main city, ahead of an Islamic festival following India's decision to strip the region of its constitutional autonomy.

Magistrate Shahid Choudhary in a tweet said that more than 250 ATMs have been made functional and bank branches opened for people to withdraw money ahead of Monday's Eid al-Adha festival. 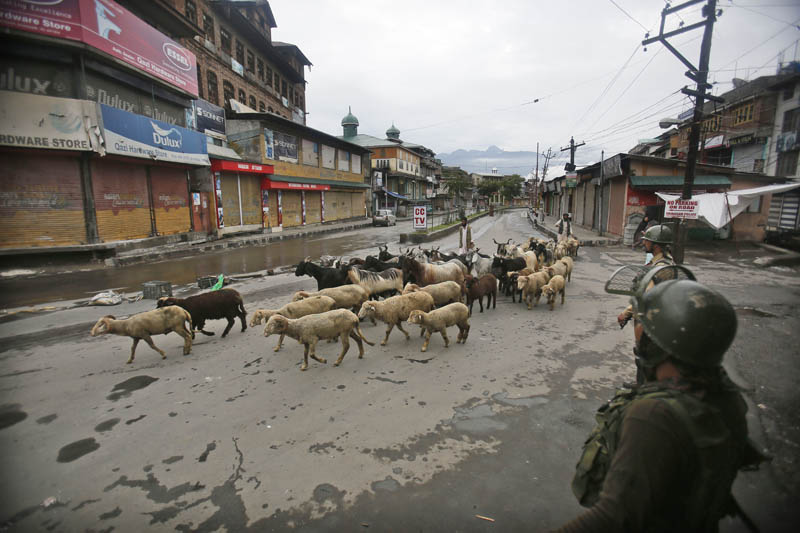 There was no immediate independent confirmation of reports by authorities that people were visiting shopping areas for festival purchases as all communications and the internet remain cut off for the seventh day.

Authorities appear to be acting with utmost caution because of a fear of a backlash from residents who have been forced to stay indoors since last Monday.

India's main opposition Congress party leader Rahul Gandhi on Saturday said there are reports of violence and "people dying" in the region. Talking to reporters in New Delhi, Gandhi said "things are going very wrong there," and called for the Indian government to make clear what is happening.

Authorities in Srinagar said there have been instances of stone-pelting by protesters but no gun firing by security forces in the past six days. Television images showed the movement of cars and people in some parts of Kashmir.

State-run All India Radio quoted the region's top bureaucrat, Chief Secretary BVR Subrahmanyam, as saying that people were coming out of their homes for Eid shopping. He also said that Srinagar and other towns witnessed good road traffic on Saturday.

He said communication facilities would be restored in phases. "We have only taken precautionary measures with the view that even small incidents should not occur when a major decision has been made," the Press Trust of India news agency quoted him as saying.

Reddy said there had been occasions in the past when a curfew had continued for weeks at a stretch, but there was no such expectation now.

On Thursday, Modi assured the people of Jammu and Kashmir that normalcy would gradually return and that the government was ensuring that the current restrictions do not dampen the Islamic festival.

New Delhi rushed tens of thousands of additional soldiers to one of the world's most militarized regions to prevent unrest and protests after Modi's Hindu nationalist-led government announced revoking of Kashmir's special constitutional status and downgrading its statehood. Modi said the move was necessary to free the region of "terrorism and separatism."

On Saturday, Pakistan said that with the support of China, it will take up India's unilateral actions in Kashmir with the UN Security Council and may approach the UN Human Rights Commission over what it says is the "genocide" of the Kashmiri people.

Kashmir is claimed in its entirety by both India and Pakistan and is divided between the archrivals. Rebels have been fighting New Delhi's rule for decades in the Indian-controlled portion, and most Kashmiri residents want either independence or a merger with Pakistan.

"When a demographic change is made through force, it's called genocide, and you are moving toward genocide," Pakistani Foreign Minister Shah Mahmood Qureshi told reporters in Islamabad after returning from Beijing.

With India moving to erase the constitutional provision that prohibited outsiders from buying property in Jammu and Kashmir state, Indians from the rest of the country can now purchase real estate and apply for government jobs there. Some fear this may lead to a demographic and cultural change in the Muslim-majority region.

Qureshi also said that while Pakistan is not planning to take any military action, it is ready to counter any potential aggression by India.

A regional political party from Kashmir petitioned the Supreme Court to strike down the government's move to scrap the region's special status and divide the state into two federal territories. An opposition Congress party activist has already filed a petition challenging the communications blockade and the detentions of Kashmiri leaders.