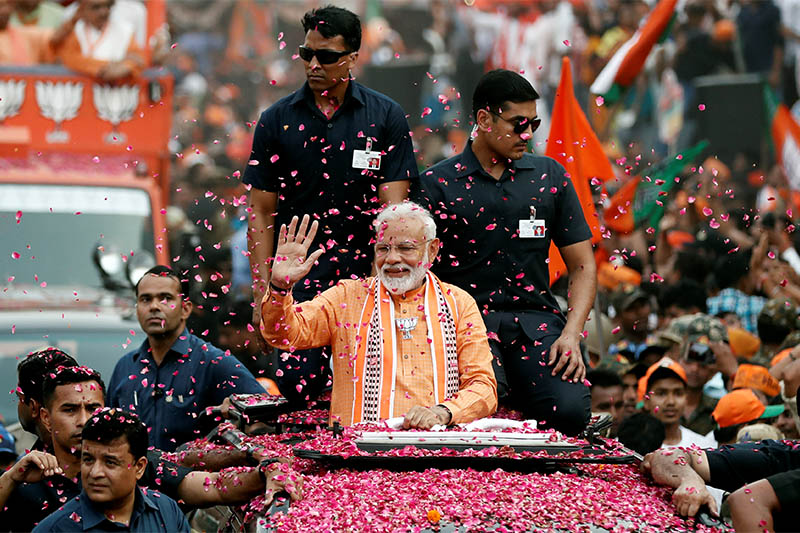 India's Prime Minister Narendra Modi waves towards his supporters during a roadshow in Varanasi, India, April 25, 2019. Photo: Reuters
BHOPAL: For nearly a decade, Pragya Thakur was known mostly as the saffron-clad Hindu ascetic shuttling in and out of Indian courts, flanked by police, facing charges under an anti-terrorism law for plotting a bomb attack on Muslims. Last month, the 49-year-old was fielded as a candidate by Prime Minister Narendra Modi's ruling Bharatiya Janata Party (BJP) in the current general election, in which he is seeking a second term. Overnight, Thakur, who has been out on bail since 2017, emerged as a symbol of a Hindu nationalist movement that is showing increasing intolerance towards Muslims in the Hindu-dominated nation. The five years of Modi's rule have seen an increasing number of attacks on Muslims by right-wing groups. But the brazenness of Thakur's candidacy has still stunned many. It's the first time a leading political party in India has fielded a candidate accused of terrorism in an election. "They are addressing a very extreme form of the Hindutva fold," said Nilanjan Mukhopadhyay, a New Delhi-based biographer of Modi, referring to the BJP’s Hindu-first ideology. Thakur says she had nothing to do with the 2008 explosion near several mosques in the Muslim-majority town of Malegaon in western India. Six Muslims were killed and more than a hundred people injured. According to court filings, the motorcycle on which the explosives were strapped was Thakur's, and she was among those who planned the attack to avenge "jihadi activities." Indian law allows candidates charged with crimes to contest elections, but not convicts. The trial against Thakur started in December but a final verdict is not expected anytime soon. Modi and BJP leaders have come out strongly in defence of her candidature. BJP President Amit Shah told a television channel last month that Thakur was given a ticket to contest "so that the whole world can know that these accusations against her were fabricated". DEFENDS GANDHI'S KILLER The BJP argues there is no such thing as a Hindu terrorist, and portrays charges against her as an affront to all Hindus. "You are saying that a saffron-clad person is a terrorist? What is this?" said Prabhat Jha, the BJP’s national vice president in central India's Bhopal city, where Thakur is contesting. He was referring to the robes worn by Hindu ascetics. Voting in Bhopal was on May 12, and results are due on May 23. Thakur stirred fresh controversy on Thursday when she called the right-wing Hindu, Nathuram Godse, who killed India's independence hero Mohandas "Mahatma" Gandhi in 1948, a patriot. "Those who call him a terrorist should look within. This election will deliver a fitting reply to such people," she said. The BJP quickly distanced itself from the comments and Thakur later apologised. "Whatever has been said about Gandhiji or Godse (Nathuram Godse), it's terrible," Modi said in a television interview on Friday. "In a civilised society, this kind of language and thinking does not work... I cannot forgive her." Thakur declined to be interviewed for this story. According to her family and supporters, she is a pious nationalist and champion of women's rights who was a former youth politics leader known for fiery speeches. Born in a village in central India, she grew up to become a leader of a youth group linked to the BJP, and usually clad in a shirt and jeans, hair cropped short, came to be referred to as "didi", or elder sister, her sister Upma said. Former members of the youth group said Thakur was known then as a "dabang", or daredevil, not afraid to pick a fight. One said she would carry a "katta" - a locally-made pistol – although others said there was no proof. Days after gaining the candidacy, Thakur boasted about her role in demolishing a 16th century mosque in the northern Ayodhya city in 1992 – an event that sparked some of India’s deadliest communal riots. "I was there, I had broken the structure, and I will go back to build the temple," Thakur said in a campaign speech, echoing BJP's promise to build a temple at the mosque site. TORTURE CLAIMS Thakur, whose family says she is a cancer survivor, has often wept while describing the torture she claims she endured in custody. But the Supreme Court said in 2011 it found no merit in her allegations. The National Human Rights Commission said in 2015 her claims "were not substantiated by facts". Her media relations head, Hitesh Bajpai, said there was proof she was tortured, but declined to elaborate. Thakur's supporters expressed deep empathy. "A woman who has suffered such torture, she will understand our issues more than anyone else," said Saumya Srivastava, a 46-year-old housewife, at a recent rally. About 500 km (300 miles) west of Bhopal, in Malegaon, there was anger among families of blast victims about Thakur's candidacy. The Supreme Court rejected a petition to bar her from contesting the election that was filed by Nisar Ahmed, whose 20-year-old son Syed Azhar was killed in the blast. "My son was killed in the attack, and today a prime accused in that is standing in an election," said Ahmed. "Is this how they give us justice?" In Bhopal, Thakur folded her hands to greet supporters one evening before heading out for a roadshow, a traditional vermillion mark fresh on her forehead. A devotee fed her sweets and lowered her head to seek blessings - to which Thakur warmly responded by placing a hand on the woman’s head. Chants of "Bharat Mata Ki Jai" (Long Live Mother India) filled the air, as her cavalcade disappeared around a street corner.
#Narendra Modi #Bharatiya Janata Party #INDIA ELECTION #Pragya Thakur
You May Also like: