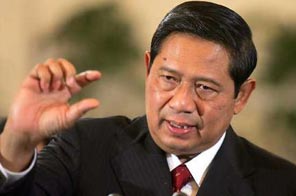 The 60-year-old liberal ex-general, who was inaugurated Tuesday, resisted pressure to name a team of non-political experts for his second and final term, and instead chose to reward coalition partners for their loyalty.

Yudhoyono won more than 60 percent of the vote in a three-horse race in July and has the backing of six of the nine parties in the House of Representatives, controlling 423 out of 560 seats.

But he appears to have paid a price for such a massive majority, in the form of cabinet seats for relatively minor parties including the conservative Prosperous Justice Party (PKS), which backs sharia or Islamic law.

Yudhoyono's centrist Democrat Party has just six out of 34 portfolios, including the powerful post of energy and mineral resources.

Yudhoyono declined to take reporters' questions during his announcement at Jakarta's presidential palace, but did allude to criticism levelled during speculation over the likely make-up of his cabinet.

"I'm nearly certain some people will not be satisfied with this or have other opinions. I think that's fine. 2004 was the same, it was the same when the last cabinet was formed, and that's democracy," he said during a nationally televised speech.

The nationalist Golkar party, which military dictator Suharto used to govern the country for 32 years until his downfall 1998, was given three posts including industry.

But in a sign of Golkar's dwindling stature, the PKS took four posts including agriculture and communications despite winning just 57 seats in parliament compared to 106 for Golkar in April general elections.

In a victory for women in the mainly Muslim country, Yudhoyono reserved the key economic portfolios for trusted technocrats Sri Mulyani Indrawati and Mari Pangestu.

Former International Monetary Fund senior executive Indrawati keeps the finance portfolio, where she has been praised for slashing public debt and taking on corruption in the customs and tax departments.

Pangestu has been a steady advocate of free trade and is expected to continue to play a market-friendly role at the helm of the trade ministry in Yudhoyono's second term.

The foreign ministry passes from Hassan Wirayuda to career diplomat Marty Natalegawa, a former ambassador to Britain who most recently has been Indonesia's representative at the United Nations.

The defence portfolio has gone from one technocrat to another, with Juwono Sudarsono handing over the reins to Purnomo Yusgiantoro, the former energy minister.

Colourful health minister Siti Fadilah Supari, who regularly inveighed against Western pharmaceutical companies over access to vaccines, has been replaced with another woman, Endang Rahayu Sedyaningsih.

#Indonesia's Yudhoyono unveils rainbow cabinet
You May Also like: