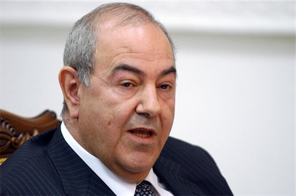 BAGHDAD: The head of a leading Shiite party has thrown his support behind a secular candidate for prime minister — a major blow to the incumbent Nouri al-Maliki.

The endorsement by the Supreme Islamic Iraqi Council gives Ayad Allawi a major boost even as anti-U.S. cleric Muqtada al-Sadr's followers voted Friday in an unofficial referendum on whom to support.

SIIC leader Ammar al-Hakim said in comments broadcast late Thursday that his party will not join any government without Allawi.

Allawi's Iraqiya list eked out a two-seat lead over al-Maliki's mainly Shiite bloc and both are trying to get enough allies to gain a parliamentary majority needed to form a new government.

Al-Sadr and al-Hakim's parties are partners in a Shiite religious coalition known as the Iraqi National Alliance.

THIS IS A BREAKING NEWS UPDATE. Check back soon for further information. AP's earlier story is below.

BAGHDAD (AP) — Iraqi supporters of a powerful anti-American cleric turned out Friday for a special vote on which candidate the potential kingmaker should support for prime minister.

Muqtada al-Sadr has withheld his backing from both big winners in the March 7 election, saying he wants his supporters to make the choice for him. This weekend's vote has no legal authority, but the Shiite cleric's support would give a major boost to the chosen candidate's efforts to get sufficient parliamentary support to form a government.

"We need security and support from the government," said Sabah Hassan, 63, who said he hopes his vote Friday in Baghdad will help bring stability to Iraq after years of war. "The election process is the best thing in the world."

A coalition led by secular challenger Ayad Allawi, a Shiite who drew on deep Sunni support, eked out a two-seat lead over a mainly Shiite bloc led by Prime Minister Nouri al-Maliki.

That gave a pivotal role to al-Sadr, whose hardline, religious Shiite party won at least 39 of the 325 parliamentary seats to become the largest bloc within the Iraqi National Alliance, a Shiite religious coalition that placed third in the race.

While the Sadrists ostensibly belong to a Shiite religious bloc which has supported al-Maliki in the past, they have a deep-rooted animosity for him after he jailed thousands of their supporters and routed their militias in Basra and eastern Baghdad.

The referendum — the latest political maneuvering to stem from the razor-thin election results — would give the Sadrist leadership an excuse not to support al-Maliki and openly back another candidate under the guise of following what the people want.

The voting to decide whom al-Sadr should support was set for Friday and Saturday at al-Sadr offices, mosques and other sites across the country.

Al-Sadr and his supporters have hated al-Maliki since U.S.-Iraqi forces crushed al-Sadr's powerful militia in 2008. The Mahdi Army, as the force is called, once led bloody uprisings against American forces and were blamed by Sunnis for some of the worst sectarian violence in 2006-2007.

Al-Sadr rose to prominence after the 2003 U.S.-led invasion, forging a political dynasty based on the network and prestige of his father, a leading Shiite cleric killed by Saddam Hussein in 1999.

Unlike other Shiite political figures, he refused to work with the United States. His unwavering opposition to the occupation is a core part of his identity and appeal to followers. People taking part in the poll would be allowed to choose from five candidates, including al-Maliki and Allawi and be allowed to write in someone of their choosing.

#Iraqi Shiite party gives boost to Allawi
You May Also like: