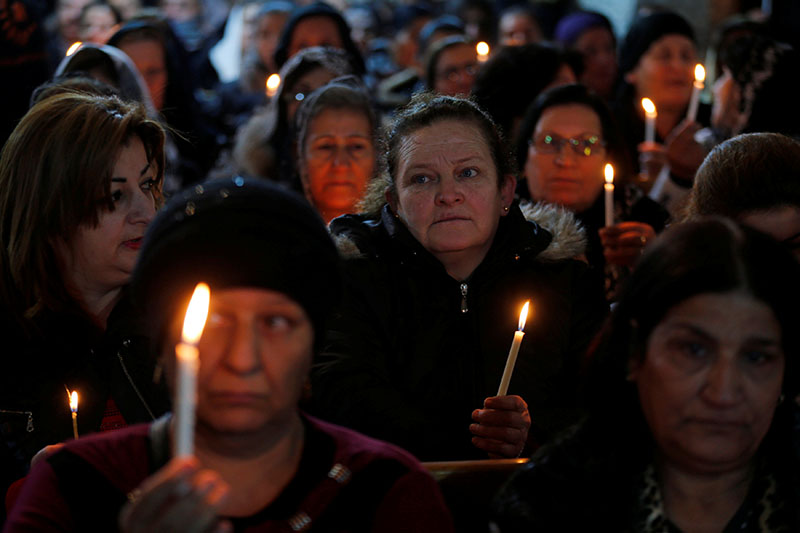 Iraqi Christians attend a mass on Christmas eve at the Mar Shemoni church in the town of Bartella east of Mosul, on December 24, 2016.Photo: Reuters
BARTELLA: Several hundred Iraqi Christians flocked on Saturday to a northern town recently retaken from Islamic State, celebrating Christmas for the first time since 2013, their joy tainted with sadness over the desecration of their church. Once home to thousands of Assyrian Christians, Bartella emptied in August 2014 when it fell to Islamic State's blitz across large parts of Iraq and neighboring Syria. Iraqi forces took it back in the first few days of the US-backed offensive that started in October. Women holding candles ululated as they went into the town's Mar Shimoni church, expressing their joy at returning to the place where many of them said they had been baptized. "This is the best day of my life. Sometimes I thought it would never come," said Shurook Tawfiq, a 32-year-old housewife displaced to the nearby Kurdish city of Erbil. The church was badly damaged during Islamic State's time in control of the town, with crosses taken down, statues of saints defaced and the chancel burnt. A new cross has been affixed on top of the chapel, while a decorated plastic Christmas tree now stands near the massive gate. Soldiers stood guard nearby and others were posted on rooftops. A peal of festive bells rang out over the town, which is still largely empty, with many houses reduced to rubble by the fighting that raged two months ago. "It is a mix of sadness and happiness," Bishop Mussa Shemani told Reuters before celebrating the Christmas Eve Mass. "We are sad to see what has been done to our holiest places by our own countrymen, but at the same time we are happy to celebrate the first Mass after two years." The region of Nineveh is one of the most ancient settlements of Christianity, going back nearly 2,000 years. At Mar Shimoni, the congregation sang and prayed in Syriac, a language close to the one spoken by Jesus. "It's the church where I was baptized, where I was educated, where I was taught the faith," said Bahnam Shamanny, the editor of Bartelli al-Syriann, a monthly local newspaper. Islamic State targeted all non-Sunni Muslim groups living under its rule and inflicted harsh punishment on Sunnis who would not abide by its extreme interpretation of Islam. The region's Christians were given an ultimatum: pay a tax, convert to Islam, or die by the sword. Most of them fled to the autonomous Kurdish region, across the Zab river to the east. It will be some time before people can return and start repairing their houses as the town lacks services and the whole area remains a war zone. "The whole town would have come to the church if they had the means," said Shamanny. Those who attended the Mass came in a special convoy of buses from Erbil. The front line in the battle has moved to Mosul, Islamic State's last major stronghold in Iraq, 13 kilometers (8 miles) to the west. There, militants are dug in among civilians, fighting off the advance of elite Iraqi units with suicide car bombs, mortars and snipers. More than one million people are estimated to live in areas of the city that remain under militant control, complicating the war plans of the Iraqi army and the U.S.-led coalition providing air and ground support. "This is a dark cloud over Iraq," Bishop Shemani told the assembly in his Christmas Eve sermon in Bartella. "But we will stay here in our land no matter what happens. God is with us."
#Islamic State #Mosul #Assyrian Christians #Iraqi Christians #First Christmas #Bartella #Christmas in Mosul
You May Also like: