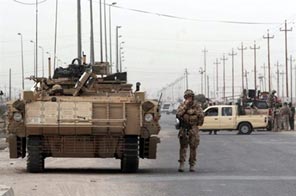 British and Iraqi soldiers set up a road block. An investigation has been launched into allegations that British soldiers tortured Iraqi civilians, Britain's Ministry of Defence said. Source: AFP

LONDON: An investigation has been launched into allegations that British soldiers tortured Iraqi civilians, the Ministry of Defence said.

The announcement of the probe came after the Independent said 33 cases of alleged abuse had been reported, including claims of rape, the use of torture techniques and physical assault.
The newspaper said the civilians claimed British soldiers in Iraq copied sexual and physical abuse from photographs taken at the notorious US-run Abu Ghraib jail in Baghdad, which emerged in 2004.
A legal letter was served on the ministry last week by a lawyer representing the Iraqis, the report said.
Armed forces minister Bill Rammell said "formal investigations" must be carried out "without judgments being made prematurely".
He added: "Over 120,000 British troops have served in Iraq and the vast, vast majority have conducted themselves to the highest standards of behaviour, displaying integrity and selfless commitment.
"While there have been instances when individuals have behaved badly, only a tiny number of individuals have been shown to have fallen short of our high standards.
"Allegations of this nature are taken very seriously, however allegations must not be taken as fact and formal investigations must be allowed to take their course without judgments being made prematurely."
In the letter to the ministry, reported in the newspaper, lawyer Phil Shiner said: "Given the history of the UK's involvement in the development of these techniques alongside the US, it is deeply concerning that there appears to be strong similarities between instances of the use of sexual humiliation."
One claimant alleges he was raped by two British soldiers, while others say they were striped naked, abused and photographed between 2003 and 2007, the Independent reported.
Female British soldiers are alleged to have taken part in the alleged incidents.
Camp Bucca near Basra in southern Iraq, where British and US troops worked alongside each other, was named by the newspaper as one possible scene of the alleged abuse.
In September 2003, Iraqi hotel receptionist Baha Mousa died after suffering 93 injuries, including fractured ribs and a broken nose, while in British military custody in Basra, southern Iraq. A public inquiry into the case is taking place in London.
Photographs taken at Abu Ghraib showed naked and hooded prisoners being beaten until they bled by their US guards and made to commit humiliating acts such as simulated homosexual intercourse.
In 2006, then US president George W. Bush admitted the scandal was the biggest blunder Washington had made in its entire Iraq campaign, and the facility was closed and handed over to Iraqi control.

#Iraqis claim torture by soldiers
You May Also like: