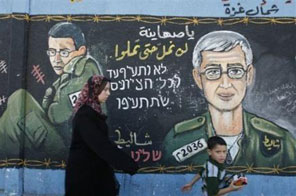 JERUSALEM: Israelis marked the third anniversary on Thursday of the capture by Hamas of soldier Gilad Shalit as Human Rights Watch (HRW) called his continued detention "cruel and inhumane."
Family, friends and supporters planned to gather in front of the defence ministry in Tel Aviv on Thursday evening to call for his release.
"Please help us to get the current leadership to do what needs to be done and bring Gilad home," the soldier's mother, Aviva Shalit, said in an emotional plea to Israelis.
"I turn to you knowing that Gilad has become the son of an entire people," she said in an open letter.
Then a 19-year-old corporal, he was snatched by militants from Hamas and two smaller groups who had tunnelled out of Gaza on June 25, 2006, and attacked an army post, killing two other soldiers.
Shalit, who has since been promoted to staff sergeant, is believed to be held somewhere inside the Gaza Strip, which has been run by Hamas since the Islamist movement seized power in the Palestinian enclave two years ago.
The Haaretz newspaper reported that Israel recently received information via Egyptians involved in mediation with Hamas that Shalit is in reasonable health.
"Hamas authorities should immediately allow Sergeant Gilad Shalit of Israel to communicate with his family and to receive visits from the International Committee of the Red Cross (ICRC)," New York-based HRW said.
"Hamas?s prolonged incommunicado detention of Shalit is cruel and inhumane and may amount to torture," a statement said.
"Punishing Shalit for grievances against Israel is unjust and unlawful," HRW said, adding that "the laws of war prohibit cruel and inhuman treatment of persons in custody."
The Israeli human rights group B'Tselem called for Shalit's release and also said he must be allowed family and ICRC visits.
"The circumstances of Shalit?s capture three years ago and the behaviour of his captors clearly indicate that he is legally a hostage. Hostage taking is absolutely prohibited under international humanitarian law," B'Tselem said.
The east Jerusalem-based Arabic-language newspaper Al-Quds printed a B'Tselem advertisement calling for the soldier's immediate release, but the Gaza daily Palestine refused to run it, the group said.
Israel and Hamas have held months of indirect talks through Egyptian mediators on a prisoner swap that would see hundreds of Palestinian detainees set free in exchange for Shalit, but no deal has been struck.
Hamas has rejected requests by the ICRC to visit Shalit.
HRW also said Israel has "deprived Palestinian prisoners of family visits." An ICRC programme that allowed Gaza relatives to visit Palestinian prisoners held in Israel was suspended when Israel imposed a tight blockade on the coastal strip following Hamas's seizure of the territory in June 2007.
The watchdog also said Israeli authorities have detained Hamas members without charge in the West Bank in arrests related to the Shalit case.
"It?s time for both Israel and Hamas to stop destroying lives and families by using the other side?s detainees as bargaining chips," said Sarah Leah Whitson, who heads HRW's Middle East section.
Abu Mujahid, a spokesman for the Popular Resistance Committees, one of the groups that seized Shalit, insisted the soldier "will not be released as long as the demands of the resistance are not met."
In a statement on the Hamas website, Abu Mujahid said he had arranged his wedding for Thursday, to mark the anniversary of the "historic" day when Shalit was captured.
Meanwhile, an opinion poll found that 69 percent of Jewish Israelis support the release, as part of a prisoner swap deal, of Palestinian prisoners who have been directly involved in violent attacks, one of the sticking points in the negotiations.

#Israel: 3rd anniv of soldier's capture
You May Also like: