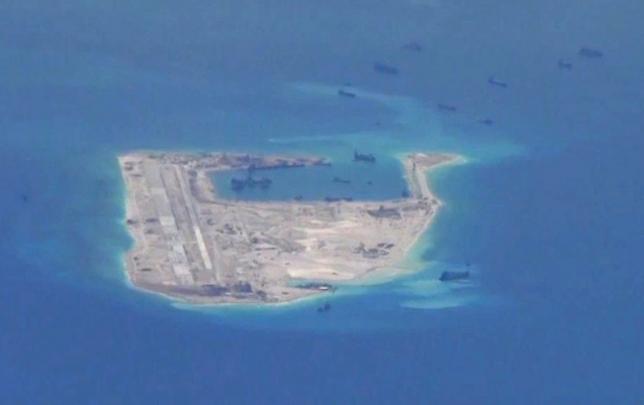 Chinese dredging vessels are purportedly seen in the waters around Fiery Cross Reef in the disputed Spratly Islands in the South China Sea in this still image from video taken by a P-8A Poseidon surveillance aircraft provided by the United States Navy May 21, 2015.  Reuters
TOKYO: Japan's annual defence review on Tuesday expressed "deep concern" over what it sees as China's coercion as a more assertive Beijing flouts international rules when dealing with other nations. Japan's Defence White Paper comes amid heightened tension in Asia less than a month after an arbitration court in the Hague invalidated China's sweeping claims in the disputed South China Sea, in a case brought by the Philippines. China has refused to recognise the ruling. Japan called on China to adhere to the verdict, which it said was binding. Beijing retorted by warning Tokyo not to interfere. In the defence review approved by Prime Minister Shinzo Abe's government, Japan warned that "unintended consequences" could result from Beijing's assertive disregard of international rules. "China is poised to fulfil its unilateral demands without compromise," the government said in the review. China claims most of the 3.5-million-square-km (1.35- million-square-mile) South China Sea, with Brunei, Malaysia, the Philippines, Taiwan and Vietnam also staking claims. Japan has no territorial claims there, but it fears that Chinese military bases will bolster Beijing's influence over a region through which $5 trillion in trade passes every year, much of it to and from Japanese ports. Rather than confront China directly by sailing warships past its man-made island bases in the sea, Japan is providing equipment and training to the Southeast Asian nations, including the Philippines and Vietnam, which are most opposed to China's territorial ambitions. Beijing's most powerful adversary in Asia is the United States, with its Seventh Fleet operating from bases in Japan and South Korea. Japan has Asia's second-biggest indigenous navy.. The defence review noted China's growing capability to threaten naval vessels with its growing armoury of anti-ship missiles. At 484 pages, Japan's document is more than a tenth longer than last year's report, and lays out other security concerns, such as the threat from neighbouring North Korea's ballistic missile and nuclear bomb programmes and a revival of Russian military strength in the Far East. It takes 50 pages to outline Japan's deepening alliance with the United States, as Tokyo takes a step back from its war-renouncing constitution by easing curbs on overseas operations for its Self Defence Forces.
#China #Japan #South China Sea #Philippines
You May Also like: