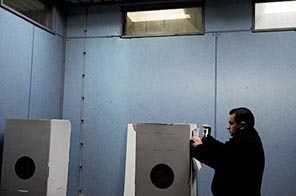 A Kosovo Serb prepares his vote at a polling station in Gracanica. Kosovo citizens went to the polls Sunday for the first time since the ethnic Albanian majority declared independence from Serbia in February 2008. Source: AFP

Prime Minister Hashim Thaci said his Democratic Party of Kosovo (PDK) won convincingly in 20 out of 36 municipalities in Sunday's local elections.
"The victory of the PDK presents a referendum about good governance in the Republic of Kosovo," he told to hundreds of his followers who were chanting his name.
On the other side, the Democratic League of Kosovo (LDK) of President Fatmir Sejdiu, which is the junior partner in the governing coalition, claimed absolute victory in the capital of Pristina by wining the mayor's post and the majority in the local assembly.
"It was a good day for the LDK," vice-president of LDK, Lutfi Haziri, told reporters, claiming his party won also in several important Kosovo's municipalities.
Kosovo citizens went to the polls Sunday for the first time since the ethnic Albanian majority declared independence from Serbia in February 2008. Its independence has been recognised by 63 countries including the United States and the most of the European Union.
According to the electoral commission, some 45 percent of the 1.5 million eligible voters voted for mayors and local representatives in what Serbia sees as a renegade southern province.
Despite its previous promise, the electoral commission failed to release the first preliminary results of the vote by Sunday midnight. It released only preliminary results for nine small municipalities.
"It was not possible to complete the results in such a short time," chairwoman of the election commission, Nesrin Lushta, told reporters, promising the complete results by late Monday afternoon.
However, thousands of sympathizers of the both parties celebrated separately on Sunday evening by taking the streets of Pristina, honking their car horns, waving party flags and setting off firecrackers.
Voting passed off calmly, with turnout among minority Serbs higher than expected in central Kosovo where around 80,000 out of 120,000 members of the community live.
Election authorities said there had been no major irregularities.
International observers were expected to announce Monday afternoon if the vote met standards.
Runoffs will be held on December 13 in municipalities where candidates fail to win more than 50 percent of the vote in the first round.