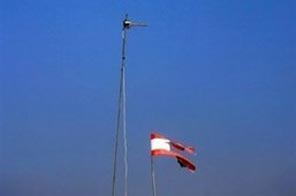 A torn Lebanese flag flutters as Israeli jets violate Lebanese airspace over the village of Zawtar in south Lebanon in 2006. Source: AFP

BEIRUT: Lebanese anti-aircraft guns opened fire on four Israeli warplanes which were violating its airspace at low altitude on Monday, the military said.
"The army's anti-aircraft guns fired at four enemy Israeli planes that had been overflying the (southern) area of Marjayoun this morning," an army spokesman told AFP on condition of anonymity.
An AFP correspondent in southern Lebanon said about 70 rounds had targeted four Israeli aircraft.
A UN spokesman in Lebanon said the overflights were a violation of UN Security Council Resolution 1701, which ended a devastating 2006 war between Israel and Lebanon's Shiite Hezbollah.
"We have been noticing a significant number of Israeli overflights into Lebanese airspace over the last week, which constitute a violation of Resolution 1701," UNIFIL deputy spokesman Andrea Tenenti said.
"We have, as always, strongly protested these violations to the Israeli Defence Forces and reported them to the Security Council," he told AFP.
Israel argues that the overflights are necessary, despite Resolution 1701, to monitor what it says is massive arms smuggling by Hezbollah in breach of the same resolution.
While Lebanon's army publishes almost daily reports of Israeli violations of Lebanese airspace, the military rarely opens fire unless the planes fly within range of its guns.

#Lebananon fires on Israeli planes
You May Also like: