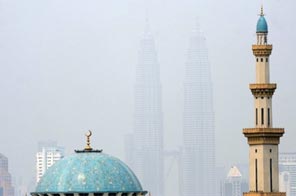 Malaysia's landmark Petronas Twin Towers are seen in the background behind the minerat of a mosque in Kuala Lumpur. Source: AFP

The Herald has been using the word "Allah" as a translation for "God" in its Malay-language section, but the government argued "Allah" should be used only by Muslims.

The court ruled the Catholic paper had the "constitutional right" to use the word 'Allah', declaring the government's ban on the word "illegal, null and void". Government lawyers have not yet decided whether to appeal.

Muslim groups have opposed the ruling.

"The court decision is not right and we are planning to hold a major demonstration to protest this," Syed Hassan Syed Ali, secretary general of Malay rights group Pribumi Perkasa told AFP.

He and 50 other Malay activists held a small protest over the ruling outside a central mosque Friday.

"We fear that the court victory will mean that Christian missionaries will now use the word, confusing (the identity of) Muslims and undermining religious harmony," he said.

Federation of Malay Students' Association advisor Reezal Merican said although the court decision had to be respected, the government needed to appeal it.

"We want to live in peace with all religions here but the word Allah has traditionally in Malaysia been used to represent the Muslim God, which is different from Christianity, and this must be addressed," he told AFP.

Northern Perak state mufti Harussani Zakaria was also critical of the verdict, calling it "an insult to Muslims in this country," according to the influential Malay-language Utusan Malaysia newspaper.

The Herald is printed in four languages, with a circulation of 14,000 copies a week in a country with about 850,000 Catholics.

The court case was among a string of religious disputes that have erupted in recent years, straining relations between Muslim Malays and minority ethnic Chinese and Indians who fear the country is being "Islamised".