Militants, migrants, pope and Putin to headline at United Nations 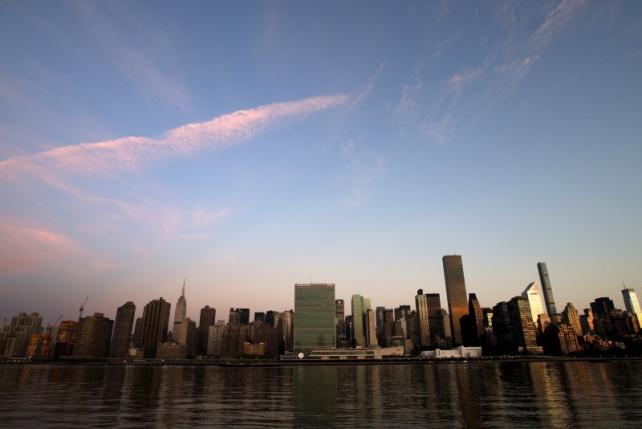 The United Nations headquarters in Manhattan is seen across the East River as the sun rises in New York September 17, 2015. REUTERS
UNITED NATIONS: World leaders will gather for their annual meeting at the United Nations starting Friday as Europe faces a flood of asylum seekers, many fleeing Syria's civil war in the worst humanitarian crisis since the world body was created 70 years ago. Islamic State will also top the agenda. US President Barack Obama will host a counterterrorism meeting, with over 100 countries invited, that will address Islamic State, foreign terrorist fighters and violent extremism. Russian Foreign Minister Sergei Lavrov will chair a high-level UN Security Council meeting on counterterrorism. But before the marathon of speeches in the 193-member General Assembly starts on Monday, Pope Francis will address the United Nations on Friday ahead of a three-day summit with more than 150 world leaders that will formally adopt a global sustainable development agenda for the next 15 years. "General Assembly high-level week is always known as diplomatic speed-dating, but I think this year is breaking records," said the US ambassador to the United Nations, Samantha Power. She said it was believed to be the highest number of world leaders attending in UN history. The leaders making rare appearances for the United Nations' 70th anniversary include German Chancellor Angela Merkel, Cuban leader Raul Castro and Russian President Vladimir Putin. The United Nations was established as the successor to the failed League of Nations in 1945 after World War Two to prevent a similar conflict from occurring again. Xi Jinping, who is in the United States for an official visit this week, will make his UN debut as China's president. The new sustainable development agenda, which was agreed by UN members last month, aims to wipe out hunger and extreme poverty, reduce inequality within and between countries, achieve gender equality, improve water management and energy, and urgently combat climate change. Francis, a strong advocate for action to combat climate change who in June issued the first papal document on the environment, will be the fifth pope to address the United Nations. Putin will address the assembly on Monday. While he has no formal meeting planned with Obama, there will be opportunity for the two to speak on the sidelines. "It looks like Russia may table new peace proposals for Syria, but the chances of a breakthrough are low," said Richard Gowan, who teaches at Columbia University. "Putin will use his first visit to the UN in a decade to defend his support for Syrian President Bashar al-Assad forcefully, but Western and Arab governments will respond equally toughly," Gowan added. "Nasty debates over Syria could poison the atmosphere." Putin is expected to use the UN platform to speak about the need for countries to join together to destroy Islamic State and tackle the threats posed by extremism and terrorism. Tensions are high between the United States and Russia. The former Cold War foes have a common adversary in Islamic State militants, but have been deadlocked over how to end the war in Syria, with Russia supporting Assad and the United States saying he has to step aside. "In Syria, the combatants are defying all norms of humanity," UN Secretary-General Ban Ki-moon said ahead of General Assembly sessions. "Responsibility for ending this horror rests on the parties, and on the neighbors and external forces that are fueling the fighting." More than 250,000 people have been killed in Syria since a 2011 government crackdown on pro-democracy protesters spiraled into civil war, triggering the rise of Islamic State. Some 7.6 million people have been displaced, while another 4 million have fled. Tens of thousands are now making their way to Europe. Amid an uproar over the treatment of refugees and migrants by some European countries, Ban has urged European leaders to show compassion. He will host a meeting of world leaders on Sept. 30 to discuss the global migration crisis. "Brutal conflicts, breakdowns in basic governance, economic despair and other factors have generated displacements of people not seen since the Second World War," said Ban, adding that worldwide some 60 million people have fled their homes. Iranian President Hassan Rouhani and his foreign minister, Mohammad Javad Zarif, will attend as well. Zarif is expected to take part in a meeting on Monday with the foreign ministers of the six powers who negotiated a historic nuclear deal with Tehran, including US Secretary of State John Kerry. Along with Syria, the United Nations says Yemen, South Sudan and Iraq are among its worst humanitarian crises. High-level meetings are also due to be held on these conflicts during the General Assembly.
#United Nations #Syria #asylum-seekers #migrants #Civil war #President Barack Obama #militants
You May Also like: