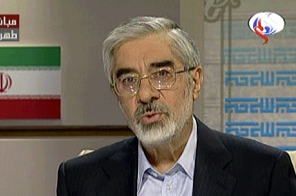 TEHRAN: Iranian opposition leader Mir Hossein Mousavi, who lost to Mahmoud Ahmadinejad in June's disputed presidential election, will join Friday's annual pro-Palestinian Quds Day march, his website said Tuesday.
Reformist cleric Mousavi is the second opposition leader to say he and his supporters will attend the public rally, after another defeated presidential candidate, Mehdi Karroubi, urged his backers to come out in force.
"Quds Day is a souvenir of the late Imam Khomeini and is the day of Islam, and he (Mousavi) along with people will attend the rally," Mousavi's office said on his website, referring to the Islamic republic's late founder.
No further details were given.
Friday's rally will be the first mass demonstration in the capital's streets since July 9 when thousands of demonstrators defied government warnings and staged a march to commemorate the anniversary of bloody student unrest in 1999.
Ayatollah Ruhollah Khomeini's successor, all-powerful supreme leader Ayatollah Ali Khamenei, has already warned against using Friday's rally for anything other than demonstrating solidarity with the Palestinians.
"Be watchful so some who want to spread division do not succeed. No division should be created," he said on Friday.
Iran's police chief, Brigadier General Esmail Ahmadi Moghadam, also warned a week ago against using the Quds Day march to stage anti-Ahmadinejad protests.
Opposition groups continue to reject Ahmadinejad's re-election, saying it was massively rigged, triggering the worst crisis in the Islamic republic's 30-year history.
In the weeks following the June 12 election, thousands of people took to the streets in protest and some 4,000 were arrested in an ensuing crackdown by the authorities.
Official figures say about 30 people were killed in street violence, while the opposition says 72 people died.
Around 140 alleged protesters have gone on trial, including leading reformist politicians, activists and employees of the British and French embassies.

#Mousavi to join mass rally in Iran despite warnings
You May Also like: