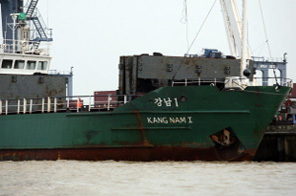 The Kang Nam I cargo ship docked at a port in Yangon on May 21, 2007. Myanmar's state media said on June 24, 2009 it was expecting the arrival of a rice-bearing North Korean ship but had no news about a vessel being tracked by a US Navy destroyer under new UN sanctions. The comments came after US officials said a North Korean ship, the Kang Nam 1, was the first to be monitored under a UN resolution designed to punish Pyongyang over a nuclear test and could be headed to Myanmar. Source: AFP

YANGON: Myanmar downplayed reports Thursday that a possibly weapons-bearing North Korean ship was headed for its shores, saying it expected another vessel from the communist state but that it only carried rice.
The comments came after a US Navy destroyer began tracking the suspect North Korean ship, the Kang Nam 1, under new United Nations sanctions designed to punish Pyongyang over a recent underground nuclear test.
Military-ruled Myanmar's government-controlled media said it had no information on the ageing Kang Nam 1 and that a separate North Korean cargo ship was due to arrive from India.
"Certain foreign news agencies have been spreading rumours these days about a DPRK (North Korea)-owned cargo vessel, Kang Nam 1, which left Nampo port, North Korea for Myanmar on June 17," the New Light of Myanmar newspaper said.
"The authorities concerned have no information about the Kang Nam 1 itself as reported by foreign news agencies." The newspaper added that the MV Dumangang cargo ship from North Korea was due to arrive in Myanmar on June 27 "for the shipment of 8,000 tonnes of rice from Kolkata, India." Myanmar and hardline communist North Korea, both of which are severely criticised internationally for human rights abuses, restored diplomatic relations in 2007 after a 24-year rift.
US officials have said that the Kang Nam 1 was being tracked by the Aegis destroyer USS John S. McCain under the UN sanctions and could be headed to Myanmar.
South Korea's YTN television news channel, citing an unnamed intelligence source, reported on Sunday the Kang Nam 1 was suspected of carrying missiles or related parts and was heading for Myanmar via Singapore.
However, Singapore's maritime and port authority said Thursday it had not received any information that the ship had requested to dock in the city-state.
The 2,000-tonne ship left the western North Korean port of Nampo on June 17, with Myanmar set as its final destination, YTN said.
The US Defense Department said overnight that the ship was still being monitored but declined to give its location or say if or when the US Navy might ask to search it. "That is a decision I think we will likely take collectively with our allies and partners out there and make a determination about whether we choose to hail and query this particular ship," press secretary Geoff Morrell told reporters.
"But that is not a decision that's been made yet, and I don't get the sense that -- that it is imminent. So I would urge everybody just to take a deep breath and to not hyperventilate about this particular ship." Concern over the North Korean ship comes as a group of exiled Myanmar activists released pictures of what they said was a secret network of tunnels built by North Korean experts inside Myanmar.
The Democratic Voice of Burma said most of the huge, vehicle-width tunnels were constructed around the ruling junta's new capital, Naypyidaw. Myanmar severed ties with Pyongyang in 1983 following a failed assassination attempt by North Korean agents on then-South Korean president Chun Doo-Hwan during his visit to the Southeast Asian nation.
The bombing killed 17 of Chun's entourage including cabinet ministers while four Myanmar officials also died, but with both countries branded "outposts of tyranny" by the United States they have sought to rebuild relations.
Tensions in Asia have soared since North Korea's long-range rocket launch in early April and its nuclear test in late May, and on Thursday Pyongyang warned that "dark clouds of nuclear war" are gathering over the peninsula.

#Myanmar denies NKorean ship reports
You May Also like: