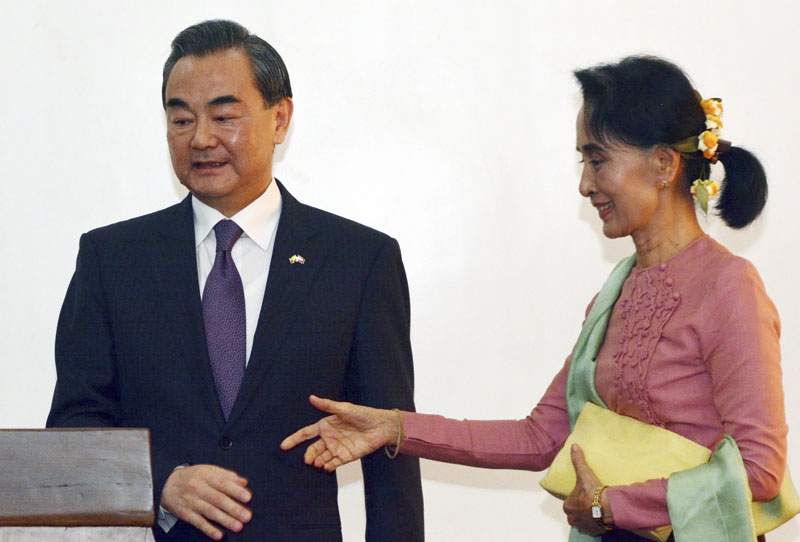 FILE - Leader of the National League for Democracy party (NLD) and Myanmar's new Foreign Minister Aung San Suu Kyi (right) and Chinese Foreign Minister Wang Yi reach a podium for their joint press conference in Naypyitaw, Myanmar, on Tuesday, April 5, 2016. Photo: AP
YANGON: Myanmar leader Aung San Suu Kyi is heading to China on Wednesday for what is likely to be her government's biggest diplomatic test, with the fate of a suspended dam project, backed by China but opposed by many people in Myanmar, in the balance. Myanmar's former military rulers were shunned by the West and close to China, which has been on a diplomatic offensive since Suu Kyi's government came to power in April, aiming to forge good ties with its resource-rich southern neighbour. Finding a solution to the $3.6 billion Myitsone dam project will be important for Suu Kyi who needs China's cooperation in talks with Myanmar's ethnic minority armed groups operating along northern borders with China. "If the Chinese leaders bring up a specific issue like the controversial Myitsone mega-dam project, of course we'll explain to them what we've been doing," Myanmar foreign ministry permanent secretary Aung Lynn told Reuters. Former Myanmar President Thein Sein angered China in 2011 when he suspended work on the hydro-power dam, at the confluence of two rivers in the Ayeyarwady river basin, after it drew widespread protests on environmental grounds. About 90 percent of the dam's power would have gone to China. At the time, Suu Kyi also called for the project's suspension. China said in March it would push the government to resume the project, insisting the contract was still valid. A government commission has begun reviewing several hydropower projects, including Myitsone, and is due to report by Nov. 11. China's Global Times newspaper, an influential tabloid published by the Communist Party's People's Daily, said on Tuesday the commission was a "sign that might herald the restoration of the China-invested project". It also noted that Suu Kyi was visiting China ahead of a trip to the United States in September, and that China's friendship with Myanmar was crucial. "As Myanmar's largest neighbour, it is necessary for Suu Kyi to attach importance to China," the newspaper said. Other Chinese projects in Myanmar have also proved controversial, including the Letpadaung copper mine, which has sparked repeated protests, and twin Chinese oil and gas pipelines across the country. Suu Kyi will be in China for four days at the invitation of Premier Li Keqiang. She will also meet President Xi Jinping. Elements in China have for years maintained contacts with northern Myanmar rebel groups and militias, some of which are led by ethnic Chinese commanders, so China's help could be key as Suu Kyi's government seeks to promote peace and stability in lawless border regions. Her government is holding a peace conference, with most of the country's ethnic minority armed groups due to take part, on Aug. 31.
#myanmar #Aang San Suu Kyi #China-Myanmar #Myitsone dam project
You May Also like: