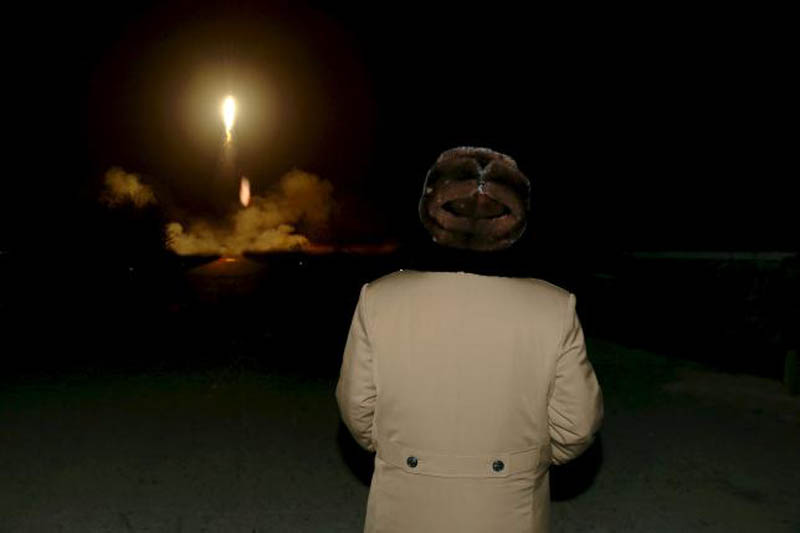 North Korean leader Kim Jong Un watches the ballistic rocket launch drill of the Strategic Force of the Korean People's Army (KPA) at an unknown location, in this undated file photo released by North Korea's Korean Central News Agency (KCNA) in Pyongyang on March 11, 2016. Photo: Reuters
SEOUL: North Korea attempted and failed to launch what experts believe was an intermediate-range ballistic missile on Friday in defiance of UN sanctions and in an embarrassing setback for leader Kim Jong Un, drawing criticism from major ally China. The failed launch, as the reclusive country celebrates the "Day of the Sun" on the birthday of Kim's grandfather, follows the North's fourth nuclear test in January and a long-range rocket launch in February, which led to new U.N. sanctions. But the North has nevertheless pushed ahead with its missile programme, supervised by Kim. The US-based 38 North website, which specialises in North Korea, has said there has been activity at the country's nuclear site based on satellite imagery, and on Wednesday said the possibility of a fifth nuclear test “could not be ruled out”. China, North Korea's most important economic and diplomatic backer, has been angered by Pyongyang's nuclear tests and rocket launches in the face of UN sanctions that China has also backed. "The firing of a mid-range ballistic missile on Friday by the Democratic People's Republic of Korea (DPRK), though failed, marks the latest in a string of sabre-rattling that, if unchecked, will lead the country to nowhere," China's official Xinhua news agency said in an English language commentary. "...Nuclear weapons will not make Pyongyang safer. On the contrary, its costly military endeavours will keep on suffocating its economy." Friday is the anniversary of North Korean founding president Kim Il Sung's birthday which is widely celebrated. In 2012, it was marked by a long-range rocket launch attempt which also failed. The US Defense Department said in a statement the launch at 0533 Korea time (2033 GMT Thursday) was detected and tracked by the US Strategic Command which also assessed it had failed. "We call again on North Korea to refrain from actions and rhetoric that further raise tensions in the region and focus instead on taking concrete steps toward fulfilling its international commitments and obligations," a U.S. State Department official said. It was likely a Musudan, South Korea's Yonhap news agency said, an intermediate-range ballistic missile with a design range of more than 3,000 km (1,800 miles) that can be fired from a road mobile launcher but which has never been flight-tested. The United States, which has 28,000 troops stationed in South Korea, said on Thursday it was aware of reports that North Korea was preparing to test intermediate-range missiles and was closely monitoring the Korean peninsula. "Timing wise, today's missile was a cannon salute on the Day of the Sun, leading up to the party congress, but now that it has failed, it is an embarrassment," said Chang Gwang-il, a retired South Korean army general. The North is scheduled to hold its ruling party congress in early May, the first such meeting in 36 years. The North could not completely ignore the sanctions, but considered it the right time to attempt a missile launch to send a message to the world "we don't surrender to sanctions", Chang said. Some experts had said North Korea may choose to test-fire the Musudan as it tries to build an intercontinental ballistic missile designed to put the mainland United States within range. North Korea, which regularly threatens to destroy South Korea and the United States, often fires missiles during periods of tension in the region or when it comes under pressure to curb its defiance and abandon its weapons programmes. The reclusive North and rich, democratic South are technically still at war since their 1950-53 conflict ended in a truce, not a peace treaty.
#China #North Korea #Kim Jong Un #Democratic People's Republic of Korea (DPRK) #missile launch
You May Also like: