Obama plans 250 more US troops for Syria, boosting force to 300 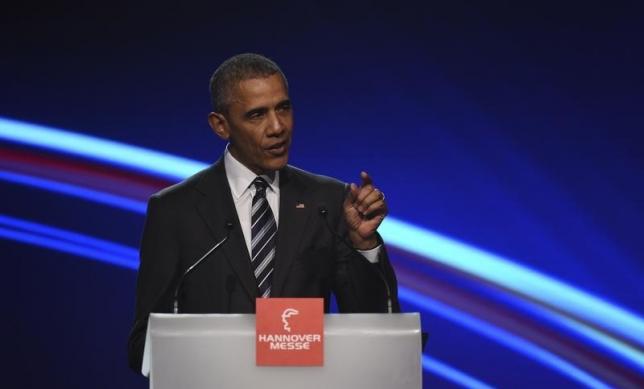 US President Barack Obama gestures as he makes a speach during the opening ceremony of the Hannover Messe in Hanover, Germany April 24, 2016. REUTERS
HANOVER: President Barack Obama will announce on Monday he plans to send as many as 250 additional US troops to Syria, a sharp increase in the American presence working with local Syrian forces fighting Islamic State militants, US officials said. The deployment, which will increase US forces in Syria to about 300, aims to accelerate recent gains against Islamic State and appears to reflect growing confidence in the ability of U.S.-backed forces inside Syria and Iraq to claw back territory from the hardline Sunni Islamist group. Obama will explain his decision in a speech at 11:25 a.m. (0925 GMT) in Hanover, where he discussed the Syria crisis with German Chancellor Angela Merkel on Sunday. They will meet with other major European leaders after his remarks. Islamic State, also known as ISIS or ISIL, controls the cities of Mosul in Iraq and Raqqa in Syria and is proving a potent threat abroad, claiming credit for major attacks in Paris in November and Brussels in March. While Obama has resisted putting US troops into Syria, where a five-year civil war has killed at least 250,000 people, he sent 50 US special operations forces to Syria last year in what U.S. officials described as a "counterterrorism" mission rather than an effort to tip the scales in the war. His decision to boost those numbers was first reported by the Wall Street Journal on Sunday and confirmed an April 1 Reuters report that the Obama administration was considering a significant increase in U.S. forces. "He (Obama) intends to put in more ... forces to the tune of 250 in Syria," one US official said on Sunday, adding he was unable to break down how many of those would be special operations forces and how many might be medical or intelligence support personnel. "The president has authorized a series of steps to increase support for our partners in the region, including Iraqi security forces as well as local Syrian forces who are taking the fight to ISIL," said a second Obama administration official. Obama pledged to wind down wars in the Middle East when he was first elected in 2008. But in the latter part of his presidency, he has found it necessary to keep or add troops to help with conflicts in Iraq, Syria and Afghanistan. The president is ending a six-day international trip that began in Riyadh, where he held talks with Gulf Arab monarchs concerned that Washington's commitment to the Middle East had diminished. After that meeting, Obama sidestepped a question about whether he would add special forces in Syria, saying: "None of the options are good" if political talks fail to end the civil war there. 'WE HAVE MOMENTUM' Obama has said the US-led coalition fighting Islamic State had made key gains in squeeze the group's territory in Iraq and Syria, reducing its numbers and cutting off its finances. "We have momentum, and we intend to keep that momentum," he said earlier this month. In Iraq, the group has been pulling back since December when it lost Ramadi, the capital of the western province of Anbar. In Syria, the jihadist fighters have been pushed from the strategic city of Palmyra by Russian-backed Syrian government forces. The Pentagon also announced last week that about 200 more troops would be deployed to Iraq, mainly to advise Iraqi troops fighting Islamic State. Since US-backed forces recaptured the strategic Syrian town of al-Shadadi in late February, a growing number of Arab fighters in Syria have offered to join the fight against the group, U.S. officials told Reuters in early April. Syria dominated the Sunday talks between Obama and Merkel. The German leader had just returned from a trip to Turkey to see refugee camps along the border. The European Union has grappled with the flood of about a million migrants last year, most fleeing the Syria crisis. Merkel pushed her EU partners to accept refugees, and recently hammered out a deal with Turkey to stop the migrant flow. After meeting with Merkel for about 90 minutes, Obama told reporters he was "deeply concerned" about a surge in violence in Syria, where government forces have stepped up bombing of rebel-held areas around the strategic city of Aleppo. On Monday, the two leaders will be joined by British Prime Minister David Cameron, French President Francois Hollande and Italian Prime Minister Matteo Renzi to discuss Syria and other foreign policy issues. Obama and Merkel made it clear they were not considering safe zones enforced with military support in Syria. "The issue surrounding a safe zone in Syrian territory is not a matter of an ideological objection on my part," he said. "It's not a matter of me not wishing I could help and protect a whole bunch of people. It's a very practical issue about how do you do it?"
#United States #Syria #Barack Obama
You May Also like: