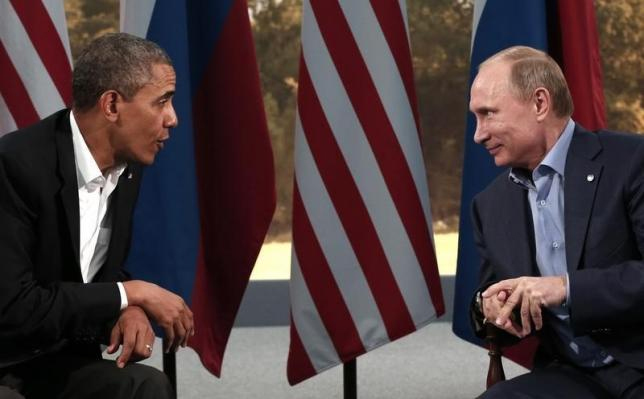 U.S. President Barack Obama (L) meets with Russian President Vladimir Putin during the G8 Summit at Lough Erne in Enniskillen, Northern Ireland June 17, 2013. Photo: Reuters
UNITED NATIONS: US President Barack Obama and Russian President Vladimir Putin agreed on Monday to direct their militaries to hold talks to avoid conflict over potential operations in Syria, a US official said. The two men also agreed to explore options for a political solution in Syria, but disagreed on the future role of Syrian President Bashar al-Assad. Obama and Putin met on the sidelines of the United Nations General Assembly. Their roughly 90-minute talk covered Ukraine and Syria, with both topics getting equal time, said the official, who spoke on condition of anonymity. Obama reiterated Washington's long-held position that Assad must go and that there was no path to stability in the war-ravaged country with him in power. Political talks would continue between the US and Russian foreign ministers, and the Pentagon would arrange the military-to-military talks, the official said. Washington has been questioning Putin's intentions in Syria, Russia's long-time ally, after Russia sent tanks and warplanes there in the last month. Washington has been bombing Islamic State targets in Syria for about a year. The official said that by the end of the meeting Putin's intentions were clear: defeating Islamic State militants and backing Assad. “We have clarity on their objectives. Their objectives are to go after ISIL and to support the government,” the official said, using an alternative reference to Islamic State. On Ukraine, Obama reiterated US support for the sovereignty and territorial integrity of that country and said the United States saw opportunities for progress on the so-called Minsk peace agreements. But he expressed concern about implementation of the pact, including plans by separatists to hold "illegal" local elections.
#US President Barack Obama #Syria #Russian President Vladimir Putin #military
You May Also like: