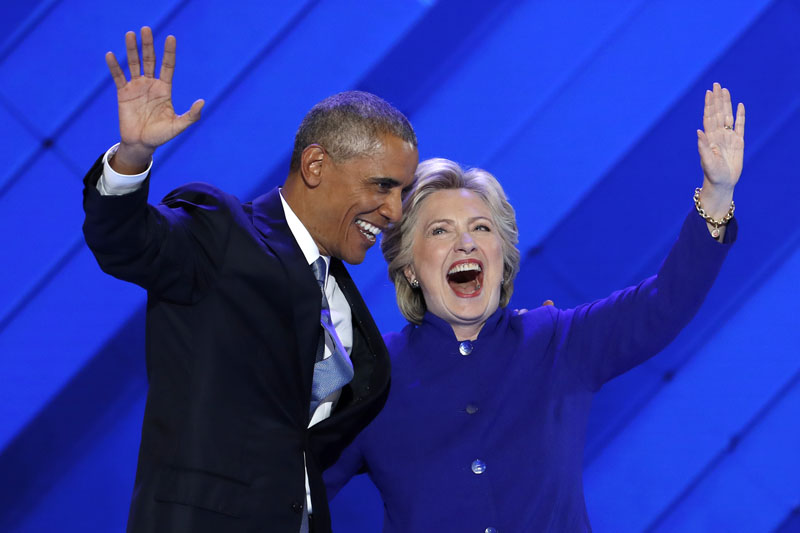 President Barack Obama and Democratic Presidential nominee Hillary Clinton wave to delegates after President Obama's speech during the third day of the Democratic National Convention in Philadelphia, on Wednesday, July 27, 2016. Photo: AP
Washington, August 3 In a searing and virtually unprecedented presidential rebuke, Barack Obama declared embattled Republican White House nominee Donald Trump “unfit” to be president yesterday and called on party leaders to disown him. Obama piled on as Trump’s campaign reeled from multiple self-inflicted scandals, calling the 70-year-old mogul “woefully unprepared” and “unfit to serve as president.” “He keeps proving it,” said Obama, standing alongside the prime minister of Singapore and casting aside any pretense of domestic unity. In recent days, Trump has criticised Muslims, babies, firefighters and the military, prompting his wincing Republican backers to issue awkward denunciations.

President Barack Obama and Democratic Presidential nominee Hillary Clinton wave to delegates after President Obama's speech during the third day of the Democratic National Convention in Philadelphia, on Wednesday, July 27, 2016. Photo: AP
Congressman Richard Hanna went one step further, becoming the first Republican lawmaker to say he will vote for Trump’s opponent, Democrat Hillary Clinton, in November. “I find Trump deeply flawed in endless ways,” Hanna wrote in a newspaper editorial announcing his decision. Obama turned up the heat on Republicans who appear increasingly ill at ease with Trump but have not withdrawn their endorsement. “This isn’t a situation where you have an episodic gaffe,” Obama said. “This is daily and weekly where they are distancing themselves from statements he’s making.” “There has to be a point in which you say: ‘This is not somebody I can support for president of the United States, even if he purports to be a member of my party.’” “There has to come a point at which you say ‘enough,’” he said. “The alternative is that the entire party, the Republican Party, effectively endorses and validates the positions that are being articulated by Mr Trump.”

President Barack Obama and Democratic Presidential nominee Hillary Clinton wave to delegates after President Obama's speech during the third day of the Democratic National Convention in Philadelphia, on Wednesday, July 27, 2016. Photo: AP
Leaders like House Speaker Paul Ryan and Senator John McCain may have been given further pause by Trump’s refusal to reciprocate their endorsements. Trump won the Republican primary handily, but is trailing Clinton in general election polls by around four percentage points. Obama has already endorsed his fellow Democrat and has repeatedly pilloried Trump’s populism. But his comments in the East Room of the White House — where Abraham Lincoln lay in state and Theodore Roosevelt today casts a painted gaze — are a significant and highly personal escalation of presidential rhetoric. Last week, Obama addressed the Democratic convention in Philadelphia and painted this election as a choice not between a Democrat and Republican, but a Democrat and a demagogue who threatens democracy. “There have been Republican presidents with whom I’ve disagreed with, but I didn’t have a doubt that they could function as president,” Obama said yesterday. Turning to his 2012 and 2008 election opponents, Obama said “Mitt Romney and John McCain were wrong on certain policy issues, but I never thought that they couldn’t do the job.”

President Barack Obama and Democratic Presidential nominee Hillary Clinton wave to delegates after President Obama's speech during the third day of the Democratic National Convention in Philadelphia, on Wednesday, July 27, 2016. Photo: AP
Trump hit back at Obama in a written statement, describing his two terms in office as an example of “failed leadership.” Obama’s comments came amid a roiling war of words between Trump and the father of a slain US soldier who rebuked the Republican nominee as having “sacrificed nothing.” “The notion that he would attack a Gold Star family that made extraordinary sacrifices on behalf of our country, the fact that he doesn’t appear to have basic knowledge around critical issues in Europe, in the Middle East, in Asia means that he’s woefully unprepared to do this job,” said Obama. Later in the day, Trump spokeswoman Katrina Pierson blamed both Obama and Clinton for the death of the soldier, Army captain Humayun Khan. “Donald Trump never voted for the Iraq War. Hillary Clinton did,” she told CNN. “It was under Barack Obama and Hillary Clinton that changed the rules of engagement that probably cost his life,” she said. Khan was killed by a suicide bomber in Iraq in 2004, when Clinton was serving in the US Senate but Obama had yet to be elected to national office. On the campaign trail on Tuesday, Trump further dropped jaws by telling a mother and her crying baby to leave a rally and saying he “always wanted to get a Purple Heart,” after being given one by a military veteran who supports him. The military honour is given by a sitting president to a member of the armed forces who is killed or wounded in combat. “This was much easier,” Trump remarked. Donald declines to endorse Ryan, McCain Washington: US Republican presidential nominee Donald Trump ratcheted up tensions in his party yesterday by denying two leading figures, House of Representatives Speaker Paul Ryan and Senator John McCain, support in their re-election bids. Trump told The Washington Post in an interview that he could endorse neither Ryan, the top US elected Republican, nor McCain, a US senator from Arizona and a former Republican presidential nominee, as they face challenges in their states’ primary contests ahead of the November 8 general election. Both Ryan and McCain had criticised Trump’s feud with the family of Army Captain Humayun Khan, who died in the line of duty in Iraq in 2004 and was awarded the Bronze Star Medal for bravery after his death. The discord comes just two weeks after the Republican National Convention in Cleveland that formally nominated Trump for president. It is the latest rift in a party already frayed by internal dissent over its standard bearer, seen in stark relief at the convention where McCain was among high-level party members who essentially snubbed Trump by choosing not to attend. Mitt Romney, the 2012 Republican nominee, and former presidents George HW Bush and George W Bush also did not attend the convention. Trump has had a running dispute with Khizr and Ghazala Khan since they took the stage at last week’s Democratic convention to cite their son’s sacrifice and criticise Trump’s proposed ban on Muslims entering the United States. The uproar has led many Republicans to distance themselves from Trump and voice support for the Khan family.
#Donald Trump #Barack Obama #John McCain
You May Also like: