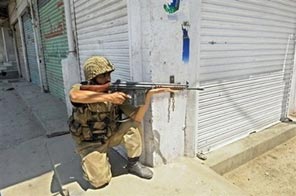 PESHAWAR: Pakistan said Friday it arrested the chief spokesman and a commander of Taliban militants in Swat, capturing the first most-wanted ring leaders behind a devastating two-year insurgency.
The northwest valley slipped out of government control after radical cleric Maulana Fazlullah rose up in July 2007, commanding thousands of followers who beheaded opponents, burnt schools and fought to enforce Islamic law.
Pakistan launched a blistering offensive against the Taliban in the district after militants marched out of the former tourist district, advancing further south towards the capital Islamabad in April and now claims the area is clear.
The country posted a reward of 50 million rupees (more than 600,000 dollars) for Fazlullah and offered rewards for 15 of his top lieutenants, last May but Friday marked the first announcement of any arrests from the list.
"Muslim Khan and Mahmood Khan with head money of 10 million rupees (120,482 US dollars) have been arrested by security forces in a successful operation in Swat," military spokesman Athar Abbas said in a statement released in English.
Muslin Khan was second on the most-wanted list behind Fazlullah. He earned notoriety as the hardline Taliban spokesman in Swat but was largely impossible to reach after the military launched its summer ground and air assault.
Mahmood Khan was number four on the most-wanted list, described as commander of Kuza Banda in northern Swat and, like the spokesman, had a 10-million-rupee price on his head.
"Along with them, three other terrorist leaders Fazle Ghaffar, Abdul Rehman and Sartaj have been also been apprehended," the military statement said. There was no known bounty money for the three.
Pakistan concentrated its military operation in Swat and neighbouring districts Buner and Lower Dir after Taliban gunmen advanced to within 100 kilometres (60 miles) of Islamabad last April in defiance of a peace deal.
The offensive forced 1.9 million civilians from their homes, creating a humanitarian crisis for impoverished Pakistan as they sheltered with relatives and crowded into refugee camps.
The United Nations said this week that 1.65 million Pakistanis have since returned home. The government has sponsored the displaced to return to areas commanders say are now safe.
But skirmishes continue, raising fears that the Taliban are regrouping in the mountains, a tactic militants adopted after previous offensives.
Fourteen police cadets were killed late August in a suicide attack in Mingora, the main town in Swat, which police blamed on Taliban militants.
Pakistan says more than 1,900 militants and over 167 security personnel were killed in the offensive but the tolls are impossible to verify independently.

#Pak arrests Swat Taliban spokesman
You May Also like: