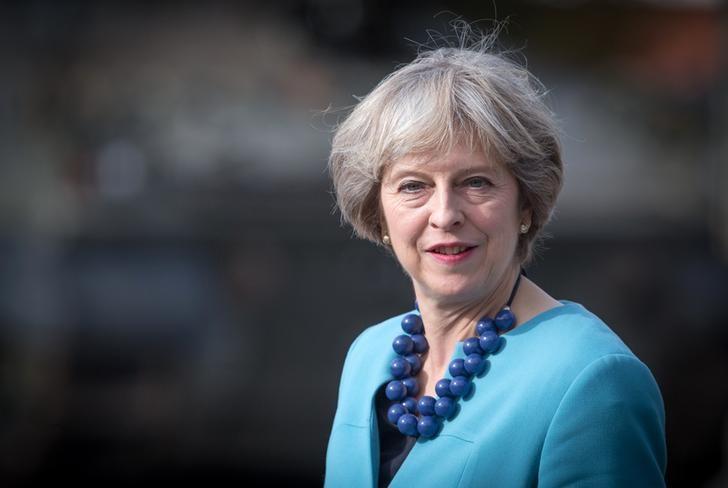 Prime Minister Theresa May greets troops as she visits 1st Battalion The Mercian Regiment (Cheshire, Worcesters and Foresters, and Staffords) at their barracks at Bulford Camp on September 29, 2016 near Salisbury, England. REUTERS
LONDON: Prime Minister Theresa May will promise to make Britain "a sovereign and independent country" by repealing the act that took it into what is now the European Union next year, she told the Sunday Times newspaper. In an interview, May, appointed after Britain's vote in June to leave the EU, said she would not wait for an election in Germany next September before triggering Article 50 of the EU's Lisbon Treaty to start formal divorce proceedings. The former interior minister has been under pressure from EU officials, investors and members of her ruling Conservative Party to offer more detail on her plan for Britain's exit, beyond her catch phrase "Brexit means Brexit". Speaking on the first day of her party's annual conference on Sunday, May will hope to put some of the criticism to rest by pledging to overturn the 1972 European Communities Act, the law allowed the accession of Britain to the European Economic Community, which later became the European Union. "We will introduce, in the next Queen's speech, a Great Repeal Bill that will remove the European Communities Act from the statute book," she told the newspaper, which said it should take place in April or May. "This marks the first stage in the UK becoming a sovereign and independent country once again. It will return power and authority to the elected institutions of our country. It means that the authority of EU law in Britain will end." May said that under her plans, the 1972 act would be overturned in advance of Britain leaving the EU but the repeal would take legal effect the moment the UK formally pulled out. Then the European Court of Justice (ECJ) would no longer be able to deliver judgments binding on Britain, she told the newspaper. The ECJ came under fire from many of those who campaigned to leave the European Union before the June referendum, with the official "Vote Leave" group saying Britain lost most of its cases to the court, which it called an "injustice". The British leader is expected to trigger Article 50 to start formal departure, which can take up to two years to negotiate, early next year, but she has been clear she does not want to give her hand away before the talks. May, who was appointed after her predecessor David Cameron resigned following the referendum, also ruled out an early parliamentary election, saying it would cause "instability" - something that has dampened investment since the referendum. Separately, her Brexit minister David Davis said in a statement that EU law would be transposed into British law on the day Britain formally left the European Union. Laws that were then deemed unnecessary would be repealed by parliament subsequently.
#European Union #Germany #britain #Theresa May
You May Also like: