Poland angry at criticism from US senators over rule of law 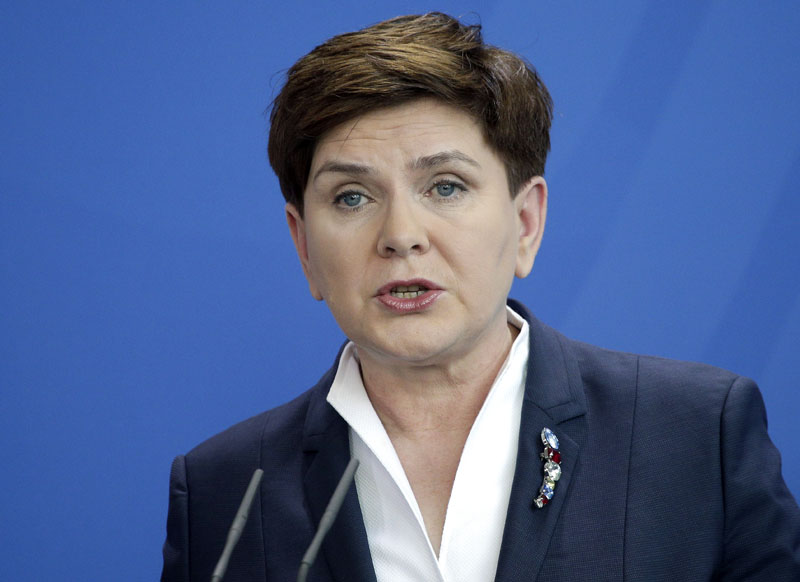 The Prime Minister of Poland, Beata Szydlo, speaks during a joint news conference with German Chancellor Angela Merkel as part of a meeting at the chancellery in Berlin, Germany, Friday, Feb. 12, 2016. (AP Photo/Michael Sohn)
WARSAW: Polish leaders say that three US senators who have expressed concerns about the rule of law in Poland are misinformed about the country and do not have the right to lecture Warsaw about its internal affairs. The bipartisan group of senators, Arizona's John McCain, Benjamin Cardin of Maryland and Richard Durbin of Illinois, sent a letter last week to Polish Prime Minister Beata Szydlo expressing their concern that the new laws affecting the constitutional court and public media "could serve to diminish democratic norms, including the rule of law and independence of the judiciary." The senators, who described themselves as "friends of Poland," urged the Warsaw government to "recommit" to shared Western democratic values. Foreign Minister Witold Waszczykowski lashed out Monday against the suggestion that anything is amiss in Poland and said the letter is the "result of a lack of knowledge about what is happening in Poland and was inspired by people who wish Poland harm." Waszczykowski spoke as he was headed to Washington for meetings and said he would address the matter with US officials. The letter follows similar criticism from European leaders and underlines how deeply Poland's international standing has deteriorated since the right-wing Law and Justice party won parliamentary elections last year. After taking power in November, Szydlo's government moved quickly to change laws on the Constitutional Tribunal and the public media. The law on the constitutional court limits the high court's power to strike down legislation that might be unconstitutional, while the media law gives the government greater powers to control public broadcasters. "An erosion of democracy in Poland would undermine liberal institutions that have successfully expanded prosperity, peace, stability, and tolerance within Europe at a time when these institutions are greatly needed," the senators wrote to Szydlo last week. In a reply, Szydlo said her government's changes to the court were simply a corrective to attempts by the previous government to control the court. And she said the American politicians do not have the right to be "lecturing and imposing actions on the internal affairs of my fatherland."
#Poland politics #American politicians #Polish leaders #US senators #Polish Prime Minister Beata Szydlo #democratic norms
You May Also like: