Poland plunged into grief by death of president 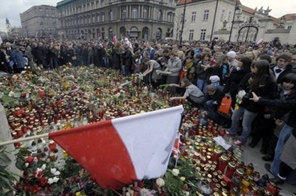 People gather in front of the presidential palace in Warsaw. Investigators trawled through flight recordings and debris to work out why pilots of a jet crash which killed Poland's president ignored warnings not to land, as the nation began a week of mourning. Source: AFP

SMOLENSK: Investigators trawled through flight recordings and debris Sunday to work out why pilots of a jet crash which killed Poland's president ignored warnings not to land, as the nation began a week of mourning.

Tens of thousands of people poured onto the streets of Warsaw and other Polish cities to show their grief after the plane came down in thick fog near the Russian city of Smolensk, killing 96 people including President Lech Kaczynski and a host of top state, military and religious officials.

The president's identical twin brother, former premier Jaroslaw Kaczynski, was among the first relatives to go to Russia to identify the victims.

The bodies of the president and his wife were to arrive in Poland at 1200 GMT, Polish radio reported, while the country was also due to hold a two minutes silence.

Russian Prime Minister Vladimir Putin is leading an official investigation into the crash on Saturday, but Russian officials have already said the Polish pilots ignored air traffic control warnings that they were too low.

Fragments of the fuselage, air traffic control recordings and the plane's "black boxes" are being studied in the probe into the causes of the crash, Russia's investigative committee said in a statement.

"Investigators together with aviation experts are studying the flight recorders," the statement said.

It added that "fragments taken from the destroyed plane" and "recordings of the communications with air traffic controllers" were also under review.

A Russian transport ministry spokesman said the voice and data recorders were at a special laboratory in the presence of Polish officials, including representatives of the Polish state prosecutor.

Russia's top investigator Alexander Bastrykin and over 40 senior specialists are now working at the crash site.

The Russian-built Tupolev Tu-154 jet was taking the presidential party to a memorial service for 22,000 Poles massacred by Soviet troops in World War II when it hit tree tops in fog while approaching Smolensk airport.

The symbolism of the president's mission to a country which has long been a rival of Poland only added to the national shock over the deaths.

Tens of thousands of mourners gathered in front of the presidential palace in Warsaw and the nearby Pilsudski Square. They prayed, sang the national anthem, waved the red and white Polish flag and laid a carpet of candles and flowers in the national colours.

Kaczynski's populist nationalism often made him a divisive figure at home and in Europe. But the nation united in grief. Profile: Kaczynski, from child star to Polish president

"It's my heart that told me to come here, I simply had to come," said 45-year-old translator Anna Ciostek, who went to the square with her daughter and mother.

Bronislaw Komorowski, the head of Poland's lower house of parliament who took over as interim head of state, joined the throng in Pilsudski Square.

"The unprecedented scale of this tragedy is unique on a global scale," he told AFP.

Polish Prime Minister Donald Tusk and Jaroslaw Kaczynski went to the crash site late Saturday where they were met by Putin.

Besides the 60-year-old head of state, the crash killed his wife Maria, Poland's military chief of staff and the heads of the main services, its central bank governor, an archbishop and members of parliament.

"Everything must be done to establish the reasons for this tragedy in the shortest possible time," said Putin.

The Tu-154 had already made three approaches to Smolensk airport when it crashed in the fog, according to witnesses and airport officials. At least one other plane had been diverted to another airport.

Lieutenant General Alexander Alyoshin, deputy head of the Russian air force, said the Polish pilots had ignored warnings from air traffic controllers that they were too low.

"The head of the (air traffic control) group ordered the crew to return to horizontal flight, and when the crew did not fulfil the instruction, ordered them several times to land at another airport," he said.

Wreckage was scattered across a forest, but the black-box flight recorders were quickly found.

The crash was only a few kilometers (miles) from the Katyn Forest where the delegation was to have attended a memorial service for the Polish officers and troops killed in 1940 by Soviet troops acting on orders from Josef Stalin.

The service was intended to help reconciliation between Poland and Russia, two decades after the end of the Cold War and the ensuing demise of communism.

Polish communities around the world held their own special church services while global leaders expressed condolences.

German Chancellor Angela Merkel was "deeply shocked", while French President Nicolas Sarkozy hailed Kaczynski as a man "driven by ardent patriotism, who dedicated his life to his country."

#Poland plunged into grief by death of president
You May Also like: