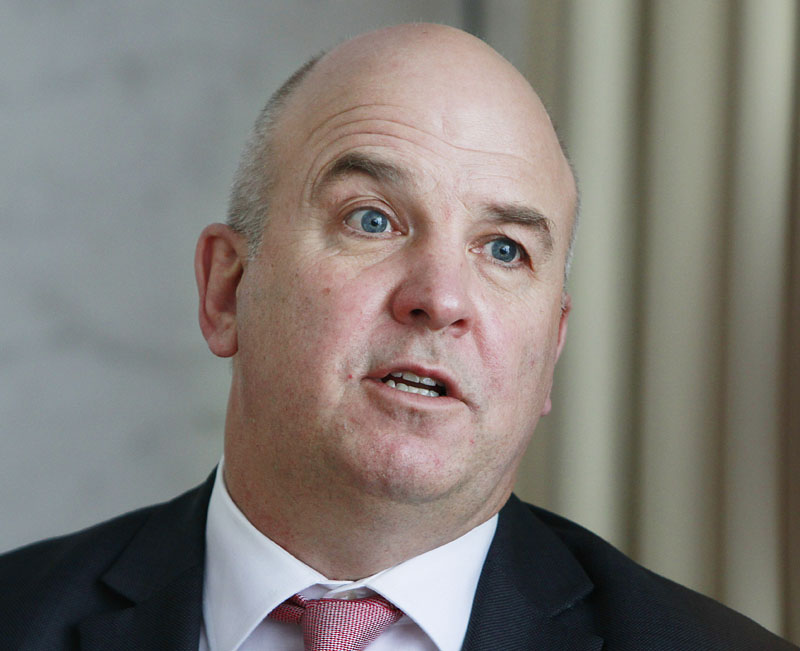 Nils Muiznieks, human rights commissioner for the Council of Europe, a human rights body, speaks to reporters in Warsaw, Poland,on Friday, February 12, 2016. Photo: AP
WARSAW: Poland's Constitutional Tribunal has become "paralyzed" by the country's new government, threatening to undermine the rule of law, checks and balances on the government's power and the human rights of Polish citizens, a top European human rights official said Friday. Nils Muiznieks, human rights commissioner for the Council of Europe, gave his assessment to reporters on Friday after four days of meetings with Polish government leaders and human rights officials in Warsaw. He was on a regular visit meant to assess Poland's protection of human rights, but said the timing was "particularly opportune" because it comes as the country has sparked concern in Europe with measures including changes to the Constitutional Tribunal and greater government control of public media. Muiznieks criticised the government, run by the right-wing Law and Justice party, for rushing through new laws without allowing sufficient time for consultations involving civil society and other professionals, reducing transparency in the law-making process. While he said insufficient public consultation is not a new phenomenon in Poland, it has become worse under Law and Justice, which took power last year. "My overall message to the authorities was 'slow down,'" he said. His greatest concern is the crisis surrounding the constitutional court, he said. Soon after taking power in November, the ruling party put through new laws which make it more difficult for the 15-judge court to issue valid rulings. The new law requires that any ruling must be backed by a two-thirds majority of judges, a change from the simple majority of the past. That will make it extremely difficult for the court to strike down any controversial legislation. The government also tried to place its supporters on the court in a way that has been deemed illegal by the very same court. "My view is that the Constitutional Tribunal is paralysed and that this is an issue of great concern," Muiznieks said. "The crisis affects not only the balance of powers within Poland and the rule of law, it also affects human rights," he said. "Because if the Constitutional Tribunal is paralysed, individuals cannot apply to the court to seek their rights. And other courts cannot apply to the constitutional court to verify the constitutionality of laws."
#Poland politics #Poland's Constitutional Tribunal #Polish citizens #Nils Muiznieks #human rights commissioner for the Council of Europe #Polish government
You May Also like: