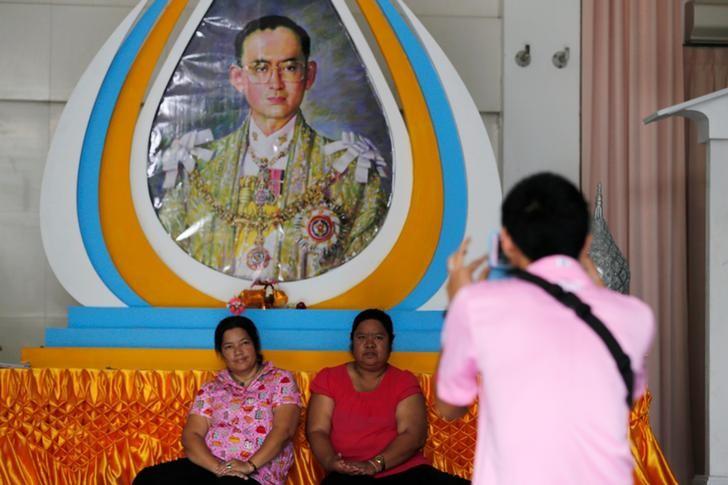 Well-wishers wear pose for a photograph in front of a picture of Thailand's King Bhumibol Adulyadej at Siriraj Hospital in Bangkok, Thailand, October 11, 2016. REUTERS/Chaiwat Subprasom
BANGKOK: About 300 people gathered at Bangkok's Siriraj hospital on Wednesday to pray for King Bhumibol Adulyadej, three days after the palace said he was in an unstable condition, as the prime minister prepared for an audience with the crown prince. King Bhumibol, 88, the world's longest reigning monarch, is widely revered in Thailand. During his seven decades on the throne the king, who is also seen as a unifying force, has intervened when events threatened to plunge Thailand into crisis. On Sunday, the palace said the king's health was "not stable" with doctors recommending that he suspend all royal duties. The palace has not issued a statement on the king's health since then. The king has been treated for various ailments over the past year at Siriraj Hospital and was last seen in public on Jan. 11, when he spent several hours visiting his palace in the capital, Bangkok. A Reuters reporter at the hospital said three of the king's four children, including Crown Prince Maha Vajiralongkorn, arrived at the hospital on Wednesday afternoon. Prime Minister Prayuth Chan-ocha, who is also head of the ruling junta, cancelled an official engagement in the eastern province of Chonburi on Wednesday morning. "The prime minister did not undertake his official duties in Chonburi province today in order to prepare for an audience with His Royal Highness the Crown Prince for a routine presentation on the government's work in progress," the foreign ministry said in a statement. "The government spokesman has urged for the Thai public to rely on official announcements for an update on situations, rather than uncorroborated information in social media circles," the ministry said, without referring to the king's health. The Stock Exchange of Thailand closed down 2.5 percent, its lowest since the end of May, after falling as much as 6.9 percent at one point to its lowest since March 1, led by shares in the aviation and tourism industries. Sunday's statement was the second health bulletin this month after the palace said on Oct. 1 that the king was recovering after a respiratory infection. Laws protecting the royals from insult make it a crime to defame, insult or threaten the king, queen, heir to the throne or regent.
#Thailand #Bangkok #Thai king’ #Thai King Bhumibol Adulyadej #Bhumibol Adulyadej
You May Also like: