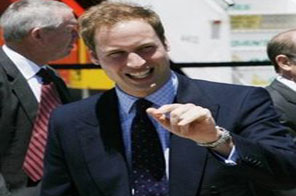 Britain's Prince William, pictured, has touched down in Australia for the first time in 27 years for a tour that will take in a poor inner-city Aboriginal community and towns devastated by wildfires. Source: AFP

SYDNEY: Prince William touched down in Australia for the first time in 27 years Tuesday for a tour that will take in a poor inner-city Aboriginal community and towns devastated by wildfires.

The second-in-line to the throne walked down the steps of a Royal New Zealand Air Force plane to meet New South Wales Governor Marie Bashir and Premier Kristina Keneally shortly after 12:20 pm (0120 GMT).

The 27-year-old prince, who last visited Australia with his parents in 1983, arrived in Australia from New Zealand where he carried out his first official visit as the representative of his grandmother, Queen Elizabeth II.

During the three-day Australia tour he will visit a barracks and an Aboriginal community centre in Sydney as well as meet with Prime Minister Kevin Rudd and attend a luncheon with Governor General Quentin Bryce.

"It's quite clearly the case that he's going to be welcomed very enthusiastically in Australia as he was in New Zealand and as he should be."

Prince William will visit Melbourne on Thursday before leaving Australia the following day.

#Prince William arrives in Australia
You May Also like: