Robinson under pressure to quit 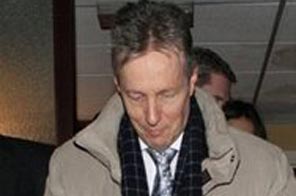 BELFAST: Northern Ireland First Minister Peter Robinson faced intense pressure on Monday to quit over his wife's affair with a teenager amid fears the power-sharing executive could collapse.
His wife Iris, also a top politician, last week admitted having an affair with a 19-year-old and securing 50,000 pounds from two wealthy developers to help him set up a cafe.
Peter Robinson has denied any knowledge of the deal which in his position as first minister he would have had to report to parliamentary authorities.
After several prominent figures called for him to quit over the weekend, Robinson, leader of the Democratic Unionist Party (DUP), will face fresh pressure as the Northern Ireland Assembly returns Monday after the Christmas break.
The DUP's power-sharing partners Sinn Fein have tabled an emergency motion calling for Robinson to explain himself before the assembly.
Meanwhile, his 60-year-old wife, who is expected to quit her seats in the Northern Ireland Assembly and the House of Commons imminently, is receiving "acute psychiatric treatment" in Belfast. She previously admitted attempting suicide and suffering severe depression.
The scandal is playing out against an already tense backdrop in Northern Ireland.
Power-sharing between ex foes the DUP and Sinn Fein was under strain due to failure to agree on the transfer of policing powers from London to Belfast, the last stage of the devolution process.
"The brutal fact is that we were heading for a dangerous political crisis in Northern Ireland even before the Robinson revelations," Irish political expert Paul Bew wrote in the Times Monday.
"It is now very difficult indeed to see how it might be avoided," added Bew, a member of the House of Lords. "We could now face a very hard landing indeed."
Robinson has vowed to clear his name, but one of his illustrious predecessors as leader of the semi-autonomous province said Sunday his position was becoming untenable.
David Trimble, who jointly won the Nobel Peace Prize in 1998 for his efforts to bring stability to Northern Ireland, predicted in a BBC interview that Robinson would quit in the "next few days".
A close friend of Robinson's predecessor and mentor Ian Paisley, David McIlveen, also said Robinson should consider standing aside temporarily.
Robinson's DUP, which is Protestant and wants the province to remain part of Britain, has shared devolved powers from London in an administration with Sinn Fein, which is Catholic and wants a united Ireland, since 2007.
Their failure to agree when control of the sensitive issue of policing should be handed back to Belfast has fuelled concerns that power-sharing could break down.
There are also fears of a return to sustained violence in Northern Ireland, where three decades of civil unrest known as The Troubles killed at least 3,500 people but was largely ended by the 1998 Good Friday Agreement.
Last year, two soldiers and a policeman were shot dead in attacks claimed by dissident republicans.
In the latest incident Friday, a Catholic police officer was seriously injured after a bomb exploded under his car as he drove to work.

#Ireland tense as Robinson urged to quit Robinson under pressure to quit
You May Also like: