Sarkozy goes in for major reshuffle 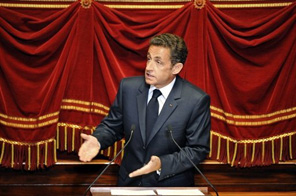 PARIS: French President Nicolas Sarkozy unveiled a major reshuffle of his right-wing cabinet Tuesday, naming new interior and justice ministers and bringing on board the nephew of late Socialist leader Francois Mitterrand.
Seeking to jumpstart his presidency half way through his mandate, Sarkozy made the wider-than-expected changes following a historic address to parliament Monday, in which he set out his roadmap for steering France out of recession.
Brice Hortefeux, a longtime Sarkozy ally who was labour and social affairs minister, was named to the strategic interior ministry, replacing Michele Alliot-Marie who takes over from star minister Rachida Dati at justice.
The most high-profile newcomer to the cabinet was Culture Minister Frederic Mitterrand, an openly-gay television personality and writer who currently heads the Villa Medici French cultural academy in Rome.
Despite his family ties to the former Socialist president, the 61-year-old is not himself a card-carrying member of the opposition party, and backed the right-winger Jacques Chirac as president in 1995.
Sarkozy's presidential chief of staff Claude Gueant announced the new lineup on the steps of the Elysee palace, following a day of consultations with Prime Minister Francois Fillon, who had argued against sweeping changes.
Foreign Minister Bernard Kouchner, a former Socialist and well-known humanitarian, remains at his post as does Christine Lagarde, the economics and finance minister, and Herve Morin at defence and Jean-Louis Borloo at the environment super-ministry.
France's envoy for Afghanistan and Pakistan, Pierre Lellouche, was named minister for European affairs, replacing Bruno Le Maire.
Eight ministers and secretaries of state were dropped from the government and eight new faces brought in.
A symbol of French ethnic diversity as the first Arab woman in a senior cabinet post, Dati is one of two ministers stepping down to take up European Parliament seats, providing the cue for the reshuffle.
In what was seen as a minor political coup, Michel Mercier, a close ally of the centrist opposition leader Francois Bayrou, becomes secretary of state for territorial infrastructure.
Fellow newcomer Nora Berra, a European MP of North African origin, joins the government as secretary of state for relations with the elderly.
But the Senegalese-born Rama Yade -- another symbol of diversity and one of Sarkozy's most popular ministers -- was moved from human rights to sports, an apparent demotion after she defied the president and refused to run in the European elections.
Sarkozy seized on a surprise boost in the opinion polls, linked to his camp's strong showing in European elections this month and his own dynamic stint at the helm of the EU presidency last year, to announce the reshuffle.
In his speech Monday in the Chateau de Versailles, Sarkozy laid out a roadmap for Fillon's new government, asking it to set strategic investment priorities for the French state for the rest of his five-year presidency.
The new government will on July 1 launch three months of consultations, with business leaders, unions and parliament, on key areas for investment, to be financed by a major state loan, from markets or the French public.
Other changes saw Bruno Le Maire at European Affairs named to the agriculture ministry, taking over from Michel Barnier, who leaves to take up a seat in the Strasbourg assembly.
Xavier Darcos was moved from education to labour ministry, tasked with shepherding delicate negotiations with French unions.
Nice Mayor Christian Estrosi, a longtime Sarkozy ally, was named minister for industry, taking over from Luc Chatel, the government spokesman and a protege of the president, who will oversee much-contested university reforms as education minister.
Mitterrand's predecessor Christine Albanel is leaving under a cloud over a flagship new Internet piracy law that was bogged down in parliament and then blocked as unconstitutional after its adoption.

#Sarkozy goes in for major reshuffle
You May Also like: