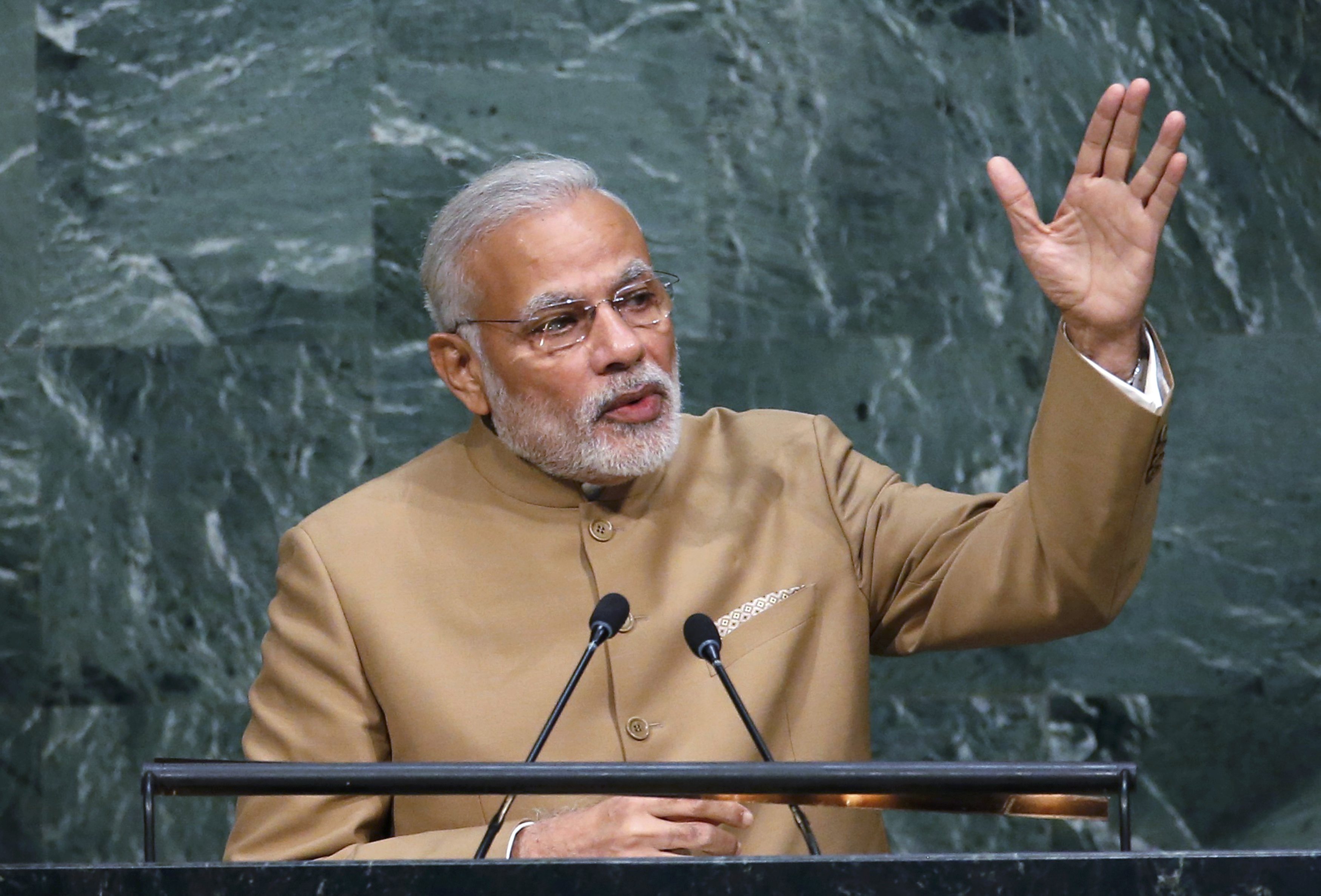 Narendra Modi, Prime Minister of India, addresses a plenary meeting of the United Nations Sustainable Development Summit 2015 at United Nations headquarters in Manhattan, New York, September 25, 2015. Photo: Reuters
SAN FRANCISCO: For a change, Silicon Valley is buzzing about something besides a sleek new device, mind-bending breakthrough or precocious billionaire. A rare visit by Indian Prime Minister Narendra Modi this weekend has captivated his extensive fan club in the area and commanded the attention of major US technology companies eager to extend their reach into a promising overseas market. It will also give Modi, a Hindu nationalist elected to office last year, an opportunity use the world's high-tech capital as a pulpit to promote his plan to transform India into a hub of innovation. He envisions a "Digital India," where ubiquitous high-speed Internet access will empower entrepreneurs to build software and other technology products that will raise the standard of living in a country where many households are still impoverished. "He's like a rock star over here," said Vivek Wadhwa, a fellow at Stanford University's Rock Center for Corporate Governance who has studied Silicon Valley and its reliance on immigrants in its technology-driven workforce. "He really does seem to understand the significance and importance of tech." Despite his popularity, Modi still faces strident criticism from some. A group of more than 100 college professors and other academics across the US have posted an open letter on the Internet warning people to beware of Modi's digital push. They say it could be a veiled attempt to enable the government to monitor private communications and suppress dissent. "A lot of this is just very good public relations management," said Thomas Blom Hansen, a Stanford University anthropology professor who has been studying India for 25 years. "All we are saying is, 'Hang on, it's not as well as it looks.'" Modi's government has raised privacy fears with a proposal that would have required Internet users to save unencrypted copies of their texts and posts on social networks, an idea that Wadhwa describes as a blunder conceived by lower-level bureaucrats in India. Another group called "Sikhs For Justice" is offering $10,000 to anyone who confronts Modi with two questions about perceived threats to religious freedom in India during a "town hall" meeting scheduled Sunday morning at Facebook's Menlo Park, California, headquarters. Modi's arrival Saturday will mark the first time an Indian head of state has been in California in 33 years, turning his appearance into a cause for celebration among the tens of thousands of Indian immigrants living and working in Silicon Valley. His appearance Sunday at a free community event in San Jose, California, will pack the SAP Center, an arena with 18,000 seats. More than 45,000 people had requested tickets. Event organizers now believe Modi might have been able to fill the nearly 70,000 seats at Levi's Stadium, which last month hosted sold-out concerts by pop singer Taylor Swift — one of only a few dozen people in the world who has amassed a bigger audience on Twitter and Facebook than Modi. President Barack Obama is the only elected leader more popular on those influential networks than Modi, who boasts more than 15 million Twitter followers and more than 30 million Facebook fans. Modi regularly shares his thoughts on both communication channels. Before he meets with Obama in New York on Monday, Modi will be discussing his digital agenda with some of the technology's biggest stars. He is due to dine Saturday with a list of CEOs that includes Apple's Tim Cook and two native Indians, Microsoft's Satya Nadella and Google's Sundar Pichai. His itinerary also includes Sunday's town hall alongside Facebook CEO Mark Zuckerberg, a test drive with Tesla Motors CEO Elon Musk in one of the company's trend-setting electric cars and stop at Google's Mountain View, California, headquarters. Like many other technology workers born in India, both Nadella and Pichai came to the US to study engineering. Asians now hold 25 percent to 43 percent of the U.S. technology jobs at Google, Apple, Microsoft and Facebook, according to the companies' most recent disclosures. The racial breakdowns don't specify what percentage of the companies' Asian workforce is Indian, but they all acknowledge it's a significant number. But technology companies aren't embracing Modi just to please their Indian workers. They all view India as a potentially lucrative market for years to come. Although the country has produced many successful engineers, technology entrepreneurs and executives, much of the population in India still isn't using computers. That makes it a ripe market for mobile devices and a wide range of other digital products and services. Facebook has already launched an effort to connect with lower-income Indians through Zuckerberg's Internet.org project, but that has met resistance from Indian groups who say the project favors the company's social network and other products over homegrown web services. That's just one reason why Wadhwa believes Zuckerberg and other Internet executives are trying to woo Modi as an ally. "Poverty is a massive problem in India and technology-based entrepreneurship can be an antidote," said Silicon Valley venture capitalist Venktesh Shukla, who also will be meeting with Modi on behalf of The Indus Entrepreneurs, a group that helps Indians form and launch startups. "We want to talk to him about how to create the framework to replicate the magic of Silicon Valley in India."
#Narendra Modi #Silicon Valley
You May Also like: