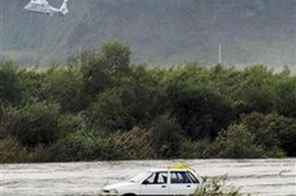 Helicopters of the National Emergency Management Agency fly to search missing people on the Imjin River in Yeoncheon, South Korea, Sunday, Sept. 6, 2009. Six South Koreans camping and fishing along a river flowing from North Korea were missing Sunday after it suddenly rose, possibly because a new dam in the North released a large amount of water without warning, officials said. Source: Agencies

SEOUL: South Korea pressed North Korea to explain Monday what caused a sudden surge of water in a river flowing across the border from the North after the flooding left three South Korean dead and three others missing.
Six South Koreans camping and fishing along a river flowing from North Korea were swept away Sunday when it suddenly doubled in height. Seoul officials believe a sharp rise in Imjin River's water level was because a new North Korean dam just north of the border discharged an estimated 40 million tons of water without notice.
On Monday, the South Korean government sent a message to North Korea, expressing regret over the incident and requesting an explanation from Pyongyang, according to Unification Ministry spokesman Chun Hae-sung.
"The government feels very sorry for the occurrence of the massive damage," Chun told reporters. He said South Korea also "strongly urged" North Korea not to repeat similar incidents.
South Korean officials have raised concerns that the Hwanggang Dam could cause water shortages or flooding in the South, with some saying the North could use it as a weapon. Unification Ministry officials said South Korea conveyed such concerns to North Korea during talks in 2006 and 2007, but the North hasn't responded.
Defense Ministry spokesman Won Tae-jae told reporters Monday that South Korean and U.S. officials were analyzing why the North funneled such a large amount of waters to the South. Won, however, said there hasn't been any particular signs that North Korea would use waters held in dams to attack the South.
Construction of the dam, believed aimed at channeling water to a hydroelectric plant and for crop irrigation, was about 95 percent complete early last year, according to South Korean government estimates. The dam is believed to be able to hold up to 400 million tons of water.
North Korea has four other small dams north of Imjin River and they are reportedly capable of holding only about 35 million tons of water each.
Local Gyeonggi Province official Choi Kwon-rak said the river's water level jumped from 7.5 feet (2.3 meters) to 15.1 feet (4.6 meters) Sunday morning. He said there was no other apparent cause since it had not rained in the area for several days
Rescuers found the dead bodies of three of the six missing people early Monday and were searching for other victims, local fire official Hwang Tae-geun. Hwang said about 2,500 rescuers and army soldiers were mobilized for a search mission Monday.
Choi said the area is less than six miles (10 kilometers) from the Korean border one of the world's most heavily fortified. The two Koreas are still technically at war because the 1950-53 Korean War ended with an armistice, not a peace treaty.

#SKorea asks NKorea for flood fact
You May Also like: