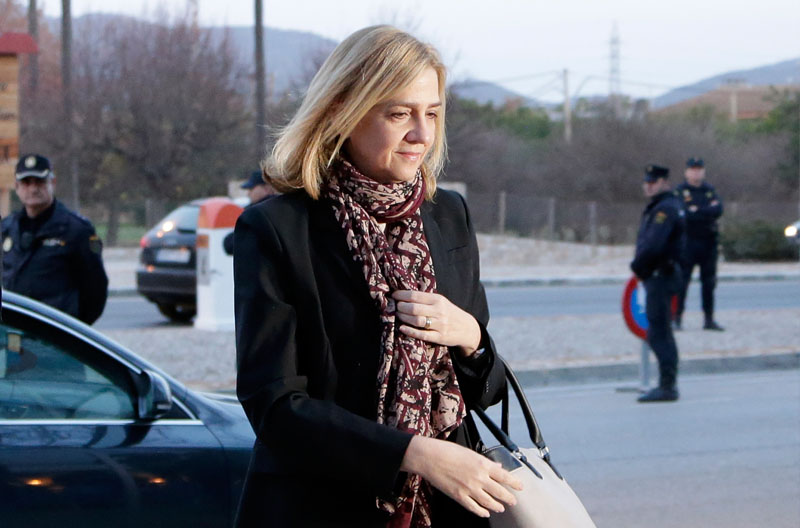 FILE - Spain's Princess Cristina arrives at a makeshift courtroom for a corruption trial, in Palma de Mallorca, Spain, on Monday, January 11, 2016. Photo: Emilio Morenatti/AP
MADRID: The leader of the anti-corruption group that brought criminal tax fraud charges against Princess Cristina was arrested Friday by financial crimes officers, a Spanish police official said. Miguel Bernad, leader of Manos Limpias (Clean Hands), was detained at his Madrid home, said the official, who declined to provide more details. The police official spoke on condition of anonymity because of police policy. The official had no information on whether Bernad has a lawyer. The group pursued criminal tax fraud charges punishable by up to eight years in prison against Cristina, the sister of King Felipe VI, after prosecutors declined to do so, saying Cristina should face an administrative fine at most. Cristina's trial is underway in the city of Palma de Mallorca. Testimony continued Friday without her presence, which is not required at this stage during witness testimony. Manos Limpias did not immediately reply to an emailed message seeking comment on Bernad's arrest. The Manos Limpias lawyer questioning witnesses in the case, Virginia Negrete, told reporters in Palma de Mallorca she had no details about why Bernad, also a lawyer, was arrested.
#Spain #Palma de Mallorca #Princess trial #anti-corruption group #criminal tax fraud #Miguel Bernad #leader of Manos Limpias (Clean Hands)
You May Also like: