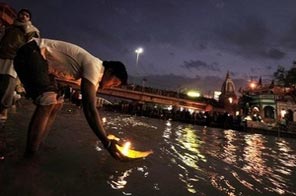 Indian Hindu devotees offer prayers on the banks of the river Ganges in Haridwar. Source: AFP

KOLKATA: Seven Hindu pilgrims were killed Thursday in a stampede at a religious festival on the river Ganges in the eastern Indian state of West Bengal, a senior police official said.
The stampede happened as hundreds of devotees rushed for places on a ferry to take them to the pilgrimage site on Gangasagar island -- where the Ganges flows into the Bay of Bengal.
"The rush became a stampede and seven people were killed," Surojit Kar Purokayastha, inspector general of the West Bengal police, told AFP.
Ritual bathing festivals were held along the length of the Ganges on Thursday, with several million devotees expected at the main gathering in Haridwar in the northern state of Uttarakhand.

#Stampede kills 7 at Indian festival
You May Also like: