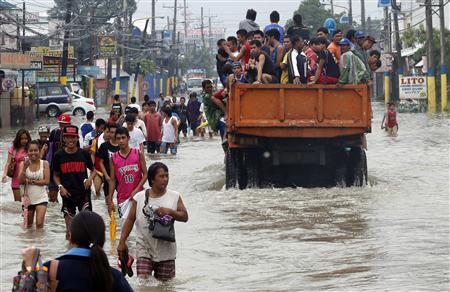 Flood victims are evacuated on a truck while other residents wade through floodwaters on a street in Bacoor, Cavite near Manila, August 20, 2013. REUTERS
MANILA: A tropical storm blowing across the Philippines' mountainous north has caused floods and knocked out power in several towns. Officials said there were no immediate reports of casualties Sunday from Tropical Storm Linfa. They said government rescue teams were deployed to evacuate villagers in some of the 11 towns flooded in La Union province, where wide areas also lost power. The storm had sustained winds of 85 kilometers (53 miles) per hour and gusts of 100 kph (62 mph). It's expected to start blowing away from the country on Monday. Meanwhile, police said a private helicopter plunged into a mountainous area in Batangas province south of Manila in bad weather from the storm, killing at least two people. An investigation was underway to determine the cause of the crash.
#storm #floods #philippine #power cut
You May Also like: