Syrian suspect in Germany 'had ties to Islamic State' 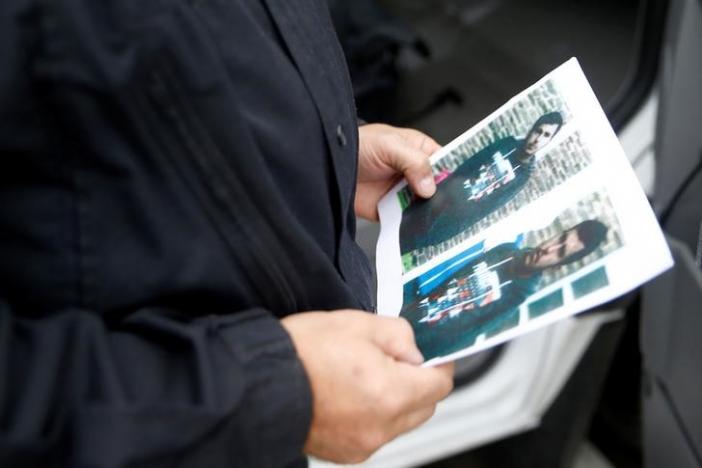 A German policeman holds the picture of a terrorist-subject infront of the main terminal of Berlin-Schoenefeld airport, in Schoenefeld, near Berlin, on October 9, 2016, following a suspicion that a bomb attack was being planned in Germany. Photo: Reuters
A 22-year-old Syrian refugee arrested in Germany on Monday had ties to Islamic State, Germany's spy chief said on Tuesday, but intelligence sources said there was no evidence he was receiving orders from the militant group. Hans-Georg Maassen, head of the domestic intelligence agency, told German broadcaster ZDF that the arrest of suspect Jaber Albakr had probably prevented an imminent attack. "We succeeded in preventing a terrorist attack just minutes before midnight," he said. Police had been hunting for the suspect since he evaded them during a raid on Saturday. Die Welt newspaper, citing investigative sources, reported late on Tuesday that Albakr had spent several months in Turkey this year, leaving in the spring and returning to Germany only in late August. It said investigators were still trying to determine what Albakr did during his time in Turkey, which an Interior Ministry report in August described as a hub for Islamist groups. Intelligence sources said it was unclear if Albakr had become radicalized in Syria or in Germany and that they had no evidence he was receiving orders from Islamic State militants abroad, as in the case of a Syrian man who blew himself up during a botched attack in the city of Ansbach in July. Police had said on Monday that Albakr, who was granted temporary asylum in Germany in June 2015, was ready to carry out attacks similar to those in Brussels and Paris. German investigators said in September they were concerned about "lone wolf" attackers who were getting instructions via instant messaging from Islamic State militants overseas, such as the man who blew himself up in Ansbach. Albakr was caught after two Syrian migrants captured and bound him after learning of the police manhunt on social media. They were hailed as "heroes" by Peter Tauber, secretary general of Chancellor Angela Merkel's Christian Democratic Union (CDU), who told the Rheinische Post newspaper: "We have to thank them for overpowering a countryman suspected of terrorism and turning him over to police." Germany's Bild newspaper quoted Mohamed A., a 35-year-old Syrian migrant, as saying that he and another man had picked up Albakr at the train station in Leipzig on Sunday after he contacted an online network for Syrian refugees. They ate together and drove to another friend's apartment where Albakr then spent the night. But after they saw police were looking for a man who matched Albakr's description they bound him with electrical extension cords and contacted police. "He offered us 1,000 euros and $200 to let him go. He had the money in a backpack, along with a knife," the newspaper quoted the man as saying. "But I am so grateful that Germany took us in. We couldn't allow him to harm any Germans." Die Welt said other asylum seekers had grown suspicious when Albakr approached them for help in finding an apartment in the eastern state of Saxony because he apparently had large sums of U.S. dollars and wanted to live alone.
#Germany #Islamic State #Hans-Georg Maassen #Jaber Albakr #Syrian suspect #German broadcaster ZDF
You May Also like: