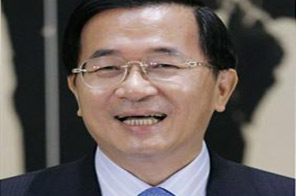 TAIPEI: A Taiwan court on Friday sentenced ex-president Chen Shui-bian to life in jail after a corruption trial he claimed was political revenge for his lifelong push to declare independence from China.
Chen, the first former leader to be convicted in a criminal case, boycotted the verdict in the Taipei district court, which also handed a life term to his wheelchair-bound wife Wu Shu-chen.
A court official said 58-year-old Chen -- held at a detention centre on the outskirts of Taipei since December -- was found guilty of embezzling state funds, laundering money, accepting bribes and committing forgery.
"Chen was using his background and position to cause damage to the country. That's why the court sentenced him to life imprisonment," court spokesman Huang Chun-ming said.
Hundreds of protesters rallied outside the court shouting, "A-Bian is innocent" and "Release A-Bian", using Chen's nickname.
Chen spokesman Chiang Chi-ming said the verdict was "totally unacceptable" and "illegal", blasting a decision to replace the judges in the middle of the trial.
"This is obviously a political persecution targeting former president Chen," Chiang told AFP.
Under Taiwanese law, a life sentence is automatically appealed.
The former president's son Chen Chih-chung got a prison term of two and a half years for money laundering, while daughter-in-law Huang Jui-ching received a suspended sentence for the same charge.
"We are very disappointed," Chen Chih-chung told reporters through his lawyer.
The verdicts marked the climax of a court drama that has gripped and divided the island's 23 million people for months.
Chen had blasted the trial as a vendetta triggered by his eight years in power when he was pursuing independence from China.
Taiwan has been governed separately from China since 1949, but Beijing still considers the island as part of its territory and has vowed to take it back, by force if necessary.
Chen has said that his Beijing-friendly successor Ma Ying-jeou was behind the alleged witch-hunt, a charge denied by Ma.
The ex-president's refusal to attend the verdict was a protest against what he considered an "illegal and invalid" ruling, his former lawyer Cheng Wen-lung told AFP earlier.
Chen, who stepped down in May 2008 after serving two four-year terms, was accused of misusing about 25 million US dollars.
The ex-president had admitted to using false receipts to claim money from the state, but insisted those funds were used for "secret diplomatic missions" -- not his personal benefit.
Chen had also said his wife wired 20 million US dollars abroad from campaign funds but that she did so without his knowledge.
Some legal experts had expressed concern about the handling of the case, including the court's decision to detain Chen before his trial and to switch the presiding judge.
Jerome A. Cohen, a US legal scholar and President Ma's former tutor at Harvard University, said that if there were an appeal, he would prefer to see Chen released for the time being.
"Every society has to protect human rights. This is a long process and a learning process for Taiwan. It is a very sad day, it is also a very important day," he told reporters.
The independence-minded Democratic Progressive Party (DPP), which Chen belonged to during almost his entire political career, said human rights were at stake given the length of Chen's detention.
"The DPP urges (the court) to immediately stop detaining former president Chen so he can have a fair trial," the DPP said in a statement Friday.

#Taiwan's ex-prez jailed for life
You May Also like: