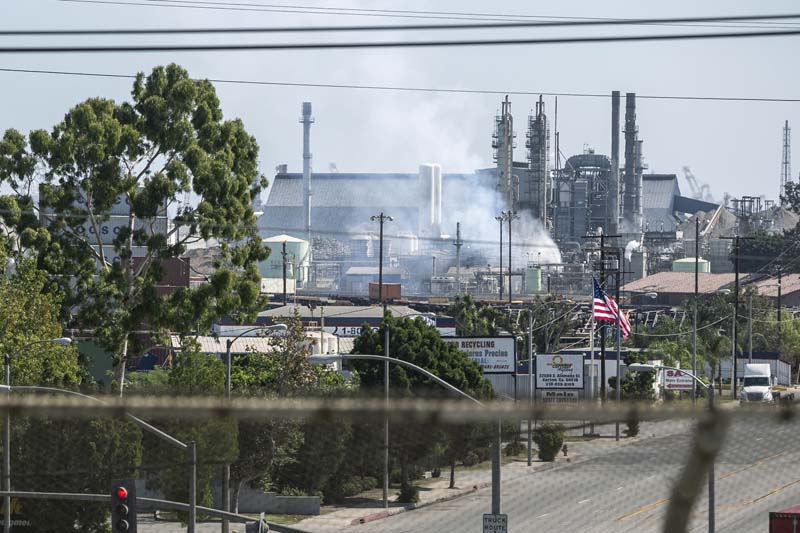 Los Angeles Sheriff's officers close Alameda Street between 223rd Street and Sepulveda Boulevard warning the public to avoid the area in Carson, California, on Friday, August 26, 2016. Photo: AP
LOS ANGELES: A sulfur storage tank exploded Friday at the largest oil refinery in California, sending a chemical cloud into the air and causing a fire, authorities said. No injuries were reported. There was no immediate word on the cause of the blast at the Tesoro refinery in Wilmington near Long Beach. The fire was quickly extinguished, but the tank continued to send up a cloud of steam for hours afterward, company officials said. "We are currently conducting air quality monitoring around the site," company spokesman Destin Singleton said. "At this time we have not detected any harmful levels of toxins." Everyone near the scene was accounted for, Singleton said. The Los Angeles County Fire Department sent in a hazardous materials team. No evacuations were ordered, but the Sheriff's Department urged people within a quarter-mile of the scene to stay indoors. That advisory was later canceled. The tank rupture didn't immediately affect other refinery operations. The 930-acre plant near the Port of Long Beach is the largest refinery on the West Coast, according to Tesoro. It produces gasoline, jet fuel, diesel and other fuels.
#Los Angeles #California #Long Beach #sulfur storage tank #tank explosion #oil refinery #chemical cloud
You May Also like: